The significance of organ prolapse in gastroschisis

BACKGROUND/PURPOSE:
The aim of this study was to evaluate the incidence and importance of organ prolapse (stomach, bladder, reproductive organs) in gastroschisis. 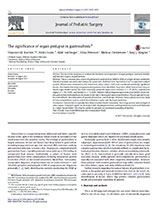 METHODS:
This is a retrospective review of gastroschisis patients from 2000 to 2014 at a single tertiary institution. Statistical analysis was performed using a chi-square test, Student's t test, log-rank test, or Cox regression analysis models. All tests were conducted as two-tailed tests, and p-values <0.05 were considered statistically significant.

RESULTS:
One hundred seventy-one gastroschisis patients were identified. Sixty-nine (40.6%) had at least one prolapsed organ besides bowel. The most commonly prolapsed organs were stomach (n=45, 26.3%), reproductive organs (n=34, 19.9%), and bladder (n=15, 8.8%). Patients with prolapsed organs were more likely to have simple gastroschisis with significant decreases in the rate of atresia and necrosis/perforation. They progressed to earlier enteral feeds, discontinuation of parenteral nutrition, and discharge. Likewise, these patients were less likely to have complications such as central line infections, sepsis, and short gut syndrome.

CONCLUSIONS:
Gastroschisis is typically described as isolated bowel herniation, but a large portion have prolapse of other organs. Prolapsed organs are associated with simple gastroschisis, and improved outcomes most likely due to a larger fascial defect. This may be useful for prenatal and postnatal counseling of families.