Veronica's birth was induced because of her large size. At 38 weeks, she was a hefty 9 lbs, 9 oz. After the doctor examined her, he said she had a bruised bottom lip, probably due to rapid birth. He also said there was a possible birthmark on her chin. I didn't mind, as my other children had birthmarks that eventually went away, and I thought they looked cute. When I looked at her, I also noticed that she had what looked like red spider veins on her cheek and neck.

She also looked a little yellow from jaundice, which is common for early babies, so she was put under bilirubin lights at home for 11 days. As the yellow started to fade, the pinkness of her "possible birthmark" started to get darker.

When she was 5 days old, her lip split open, but I wasn't too alarmed. I just thought she had chapped lips and put Vaseline on it, but it continued to get worse.

When I took her to the pediatrician for her 2-week checkup, her doctor told me that she had a hemangioma and that it would grow, but it would eventually go away on its own. Normally our doctor takes a wait-and-see approach, but because Veronica's lip had split, she recommended that we see a specialist in the near future. She called me later that same day and said the specialists at Children's Wisconsin wanted to see Veronica that same week to rule out other complications.

The first thing I did was call my dad, who is a doctor, to ask him about these complications. He did some research to find out why it was so urgent and why Veronica couldn't be seen at a Children's Wisconsin that was closer to our home. When his colleagues didn't know any more than he did, we decided that Children's would be the best place to go.

My husband is a schoolteacher, and he couldn't miss work to go with me. So, my mother drove seven hours to my house, and then that evening traveled another five hours with me to Milwaukee.

The next morning, Veronica had an echocardiogram. Then we saw Dr. David Beste, an otolaryngologist (ear, nose and throat specialist), who did an endoscopy. In this test, a tiny camera is inserted up the nose so that physicians can see up into the nasal passage and throat. He also looked at her ears. Later, we found out that Veronica has a hemangioma behind her right eardrum. She also had an MRI scan of her brain and neck and a blood test.

After all of these tests we finally got to meet Dr. Beth Drolet, who had stayed late to meet with us. Dr. Drolet examined her and discussed with us all of the treatment options. After weighing the pros and cons of each option, she prescribed oral steroids to control the growth of the hemangioma and to help prevent further breakdown of her lip. She would be on these steroids for about a year.

Dr. Drolet also told us we could send pictures of Veronica's lip to her every week so that we would not have to make the trip to Milwaukee as frequently. We still had to make monthly trips to see Dr. Drolet and Dr. Beste, with trips in between to our local family doctor.

The following week we decided that her lip was still getting worse. Two-thirds of her lip was gone. Dr. Drolet prescribed a topical gel to put on her lip. Within three days of using the gel, we noticed new tissue growth. Within a month, her lip was as healed as it was going to get on its own.

In April of 2005, she saw Dr. Beste again because of recurrent ear infections. He decided that she needed to have tubes put into her ears. He also decided that while she was under general anesthesia, he would do another nasal scope. This time he found a very small hemangioma by her vocal folds. We were now in a wait-and-see-what-happens stage. 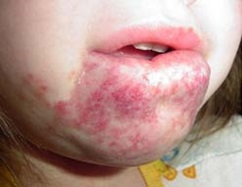 In July 2006, Veronica had an appointment with a plastic surgeon, Dr. John Jensen, to discuss lip reconstruction surgery. Dr. Jensen said he would like to do the surgery when Veronica is between the ages of 4 and 5, and he also would like most of the hemangioma to be healed so he can see what her normal lip line would be.

We also saw Dr. Drolet, and she decided it was time to start laser treatments. Veronica had the first one on Nov. 3, 2006. She did really well and was running around soon after. She didn't even need more Tylenol® during the day. I noticed a big difference in the color change. It went from shiny pink to a dull pink, and it had faded. One spot disappeared completely.

Veronica's second laser treatment was done on Jan. 5, 2007. She responded differently this time. She had a different anesthesiologist who gave her morphine, which she did not tolerate well. She was out most of the day. Once again, we noticed a big difference in color.

Once again, we sent pictures after the purple spots disappeared, and we have scheduled her third laser treatment for April. She is currently 2 years old.