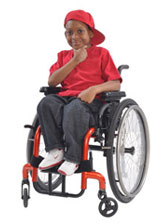 Before Jaylen was born, doctors told his mom he was going to have several health problems. Doctors actually were unsure if he would survive. Jaylen has spina bifida, which means that a portion of his spinal cord developed outside his body, causing him to have no feeling or movement in his legs. In addition, he has Arnold-Chiari syndrome, which means his brain didn't form correctly, a condition commonly related to spina bifida. He also is missing several ribs on the right side of his body.

Doctors at Children's Wisconsin's Variety Orthopedic Center have done many surgeries to help Jaylen. He's had a spinal fusion to permanently connect some of the bones in his spine. He also has special rods in his back called VEPTR, which will be lengthened and adjusted every 6 months until he stops growing. These rods help ensure that Jaylen's spine and lungs grow and develop correctly, and stabilize his body so he can sit up straight.

Children's Wisconsin surgeons perform a large number of spinal fusions and treat a wide range of spine disorders. Children with spina bifida are treated through combined efforts of orthopedic and neurosurgery experts in the Spina Bifida Clinic.

Jaylen uses a wheelchair to get around and also has a specially made bicycle that he pedals with his hands. According to his mom, Tracey, he is "a typical kid and incredibly determined. There's nothing he can't do." She said the doctors and nurses at Children's Wisconsin are awesome and very helpful. "They are always there for me, providing resources and suggestions. They've made our experience excellent," she said.

Jaylen loves video games and basketball, and he can't wait to be part of a wheelchair basketball team. He's at the top of his class in math and reading. 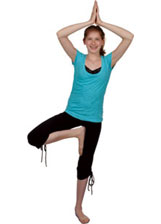 When Mary came to Children's Wisconsin for scoliosis care, our specialists found that her spine actually was curved in two places. A normal spine is straight, but when a person has scoliosis, his or her spine is curved.

Mary first wore a back brace, called a Charleston Bending Brace, for 8 to 10 hours every night. The brace works by slowly bending the spine in the opposite direction to correct the curve.

After wearing the brace for four months, doctors took images (X-rays) of Mary's spine and found one curve increased while the other stayed the same. Treating a growing child for scoliosis means ongoing adjustments to a back brace or a change in the type of brace altogether. Mary and her parents will travel to Children's from their home in Hampshire, Ill., every 6 months to have images taken of her spine until her skeleton has reached full adult height. Children's is one of two pediatric hospitals in the nation with an EOS low-dose radiation scanner, which means that there is a big decrease in the amount of radiation dose patients receive, actually up to 10 times less than a regular X-ray and up to 99 percent less than a CT (computed tomography) scan of the spine.

Mary recently started wearing a new brace, called a Boston Brace, for 20 hours a day. In just a short time, both of her curves have decreased. The purpose of the brace is to keep the curves from getting larger while Mary grows to her adult height.

Kathleen, Mary's mom, said her daughter handled the diagnosis better than she did. Mary knows scoliosis is treatable. She wears the brace under her clothes where people can't see it. She feels very comfortable when she wears it. "My friends have been really supportive," Mary said. "They accept it, they understand it and they've really helped me. I don't have to hide it, it's never any problem."

It's important to know what your options are. We can provide expert opinions to verify or give more information about an initial diagnosis. Contact orthopedics today.