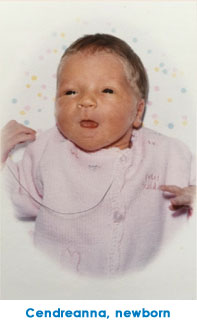 Barb Gellin could tell something was off with her daughter Cendreanna not long after she was born. It was hard to articulate, but the shape of her head didn't seem quite right. She would later learn that Cendreanna had craniosynostosis, a condition that affects about 1 in every 2,500 live births where seams between the bones of the skull are prematurely fused. This can affect the shape of the skull, as well as cause developmental and cognitive delays.

The Green Bay, Wisconsin family began coming to Children's Wisconsin when Cendreanna - who is the youngest of six siblings - was still a baby and she went on to have multiple surgeries performed at ages 10 months, and then 7, 9, and 10 years.

When did you first learn that something was wrong with Cendreanna?

Barb: Through the first few months of her life, I always noticed that her face was oddly shaped and her eyes weren't even. It actually started right after she was born, because I noticed something was wrong within the first 24 hours.

Something just didn't seem right. She was a C-section baby, and I was actually told that I was imagining things because I had too many drugs from the C-section. But it was something I pushed for, and finally when we went in for her 6-month checkup, her pediatrician said, "You are definitely right, those soft spots are closed." So we were told we would need to seek care at a craniofacial clinic, and I definitely knew I wanted it to be Children's Wisconsin in Milwaukee. They had the experience, and I knew they could help.

What happened once you came to Children's?

Barb: They called and set an appointment up for us with Dr. Jensen, a craniofacial plastic surgeon. We also met with Dr. Lew, a pediatric neurosurgeon. Within a matter of a few weeks, we had our first appointment, all the testing was set up, and about two and a half months after that she had her first surgery. She was 10 months old.

What made surgery necessary?

Barb: Without the surgery, she was at risk for pressure in her brain, which could affect brain function. Also, her head shape and facial features couldn't have been corrected without surgery, so it was definitely a surgery we had to have. The best time to have it is before 9 months of age, so we were really at the point where we had to get it done. The older you are when you have the surgery, the less it will help. Dr. Jensen suggested getting her into physical therapy and occupational therapy prior to surgery just to build up those skills and get her as advanced as possible, so that if she lost skills from the surgery, she could be relearning them instead of trying to learn them for the first time.

What was your reaction when you heard the diagnosis of craniosynostosis? 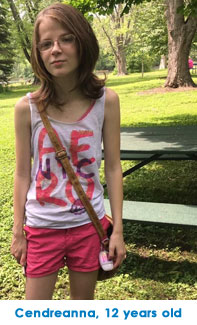 Barb: I did a lot of research right away. Dr. Jensen and Dr. Lew gave me reading material, so I just delved into it. I wanted to know everything I could. How the surgery would be done? What caused it? Most people would probably just want to know the basics, but I dug in deep. And I found out everything I could and just really educated the whole family as to what it was.

You said that it took awhile before your providers took your concerns about Cendreanna seriously, but that changed when you got to Children's. How did that feel?

Barb: Oh my gosh, fabulous. Welcoming, understanding, compassionate - it was a total different world there. It was just almost like a weight was lifted off your shoulders. They knew what I was talking about. They understood what I was trying to say. It was rewarding.

How was the coordination between all the teams at Children's who were treating Cendreanna?

Barb: Wonderful. I never had any lapse in care or any questioning of where I should be going or what I should be doing. They tried to coordinate as many visits as possible on the same day, or, if we needed to be there for two days in a row, they would schedule one appointment late in the day and the next appointment early the next morning. They would have us stay at the Ronald McDonald House, so they really helped us with coordination of care.

I told them, "It's just Green Bay - an hour-and-a-half, two-hour drive - not a big deal to me. But all the departments said, "No we'll make it as convenient as possible." And they did!

How is Cendreanna doing these days?

Barb: She's doing great. The only complications she has are migraine headaches, and we do know those are from the multiple surgeries. So now she sees Dr. Rusy at the headache clinic at Children's, and they treat her wonderfully there. They've got her on a very good headache regimen that we are able to do her medications here at home. We work with the school system, too, and they know what she needs.

Other than that, she's just a normal 12-year-old girl. She's very studious, and seems shy until you get to know her. She doesn't like to talk about her surgeries, but she's very sentimental and caring. We're so thankful for how things have turned out.