Slipped capital femoral epiphysis (SCFE) is a condition in which the femoral head ("ball" at the top of the thighbone) has slipped through the growth plate of the femoral head. (It may help to picture a scoop of ice cream slipping off of a cone.) This problem can be very serious if not treated. Your child will likely be referred to an orthopedist (doctor specializing in treating bone and joint problems) for urgent evaluation and treatment. 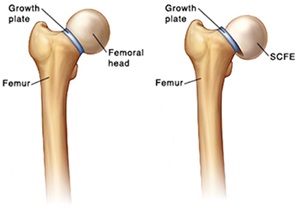 In some cases, SCFE occurs suddenly due to an injury or trauma. In other cases, it develops slowly over time due to an underlying problem. Risk factors (things that make someone more likely to have SCFE) include:

Symptoms of SCFE include:

SCFE is often diagnosed by examining the child and watching him or her walk. An imaging test such as an X-ray is done to confirm the diagnosis. In some cases, additional imaging studies such as an MRI may be needed. Other tests may be done to check for an underlying problem (such as a thyroid problem) that could cause the SCFE.

Treating SCFE is considered urgent because further slipping could damage the hip joint. To prevent further slipping, the child may be admitted to the hospital right away for surgery or instructed to use crutches and not put any weight on the leg until the SCFE can be repaired. Surgery is often done within a day or two of diagnosis. During the surgery, the surgeon puts a steel screw through the thighbone into the femoral head. This screw holds the femoral head firmly in place.

What happens after surgery?

It's important to know what your options are. We can provide expert opinions to verify or give more information about an initial diagnosis. Contact orthopedics today.