By Edward C. Kirkpatrick, DO 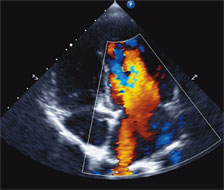 Pulmonary hypertension (PH) can present at any age from infancy to adulthood. In the pediatric population, it can be inherited, associated with other conditions such as congenital heart disease or chronic lung disease, or occur with no clear etiology (idiopathic pulmonary arterial hypertension, or IPAH). It is difficult to identify the true incidence of this disease in children, but some registry data suggests a yearly rate of 64 cases per 1 million children.1

The advent of targeted therapies in the past few years has dramatically improved the survival rate in children. Prior to these therapies, median survival of pediatric IPAH was about four years. With the pulmonary vasodilators that have entered the market in the past decade, five-year survival rates now approach 74 percent.1

The PH program in the Herma Heart Institute at Children's Wisconsin is one of just eight pediatric PH centers in the country to receive the Pulmonary Hypertension Association's highest accreditation as a Center of Comprehensive Care. Thus, we are qualified to see some of the most complex cases in the country.

Here, I highlight two cases, each of which demonstrates the challenging patients we see and the outside-of-the-box thinking and multidisciplinary approach often required to care for them.

Case 1: Delaying Lung Transplant
LS was 10 years old when she first came to our clinic with increasing fatigue. She had difficulty walking half a block without having to rest and became dizzy and short of breath after simple activities.

An echocardiogram showed evidence of severe right ventricular hypertension due to elevated pulmonary pressure, which was confirmed via catheterization. We diagnosed her with IPAH and immediately started her on pulmonary vasodilators in an effort to reduce the pulmonary pressures.

She was maintained on these medications for a few years and reported improved stamina and overall quality of life. However, her condition eventually deteriorated despite maximizing her medical therapy on three classes of PH-specific drugs, including a continuous infusion of prostacyclin. By her mid-teens, she had evidence of late-stage PH with suprasystemic pulmonary artery pressures and some right ventricular dysfunction. There are few options for such patients other than lung transplant. However, she and her parents decided against this for personal reasons at this time.

We decided to try a newly reprised approach with a procedure called the "Potts shunt." It was first used in the mid 1940s to improve oxygen in cyanotic heart patients via an anastomosis from the descending aorta to the left pulmonary artery, creating a left-to-right shunt. Today, however, cardiothoracic surgeons are using the procedure to create a right-to-left shunt in order to reduce pulmonary artery pressures, thus giving the right ventricle a "pop off" and potentially delaying the need for a lung transplant.

Surgeons in Europe had been performing this "reverse" Potts shunt since the early 2000s to address refractory PH in patients with suprasystemic pulmonary artery pressures, but it had only recently been performed in the US.2 LS became our first patient for the procedure.

Done surgically, the Potts shunt carries a high morbidity and mortality rate. However, echocardiograms and a CT scan revealed a tiny patent ductus arteriosus (PDA) in our patient. While an incidental finding not related to her PH, it provided us with an opportunity to perform the shunt without surgery, something that had been done a few times in Europe.

After careful planning, we undertook the high-risk procedure in our cardiac catheterization laboratory. A stent was placed inside the PDA and a balloon dilated to enlarge it so it could act as an adequate shunt. After stenting the PDA, the pressures inside the pulmonary arteries quickly fell. We discharged her two days later on a lower dose of prostacyclin.

The patient did require re-ballooning with a second stent seven months later due to stent fracture. She tolerated it and, again, we saw a rapid pulmonary artery pressure improvement. Since then, she has enjoyed significant clinical improvement overall in her activity tolerance and quality of life.

Her long-term prognosis, however, is guarded. In the European study, long-term follow up of 24 children who underwent a Potts shunt between 2003 and 2014 found a dramatic improvement in 21 of 24 patients at a median 2.1 years follow up. In that study, however, three patients died shortly after surgery and one patient required a lung transplant six years after the surgical Potts shunt.2

To date, we have performed three Potts shunts, two through stenting a PDA and one surgically in patients who were not lung transplant candidates. More detailed accounts of these patients can be found in our article published in the Progress in Pediatric Cardiology journal in 2018.3

Case 2: A multidisciplinary approach to managing complicated PH in a newborn
HT was a 3-day-old newborn struggling to breathe. When an X-ray showed an enlarged heart, he was transferred to Children's Wisconsin for further evaluation. Shortly after arrival, tests confirmed that he suffered from a large posterior fossa arteriovenous malformation (AVM), a rare vascular lesion with high rates of morbidity and mortality. This condition caused significant shunting and volume overload to his heart and severe pulmonary hypertension.

Correcting the lesion would require several interventional radiology procedures to occlude the AVM. However, tolerating these procedures was going to be difficult in the setting of severe PH. Therefore, after confirming his PH by echocardiography and cardiac catheterization, he was quickly escalated on PH-specific medications. This included a continuous subcutaneous infusion of a prostacyclin (treprostinil) to reduce the PH and improve cardiovascular function. It is routinely used in adults with severe pulmonary hypertension, but at this time treprostinil was rarely used in young infants.4 However, given our familiarity with this drug and our experience with infant PH, we felt comfortable using it for HT, who tolerated it very well.

Over the next five months, we worked closely with our interventional radiologists and other members of HT’s multidisciplinary team to support him medically as he underwent several interventions to occlude the AVM.

We continued to follow him closely even after hospital discharge in our dedicated PH clinic. Within two years, he was able to discontinue all PH medications. Despite a very rocky and long course as an infant, he has continued to grow and develop normally. We are confident that the aggressive PH management, including the treprostinil infusion, was critical in improving his condition enough to undergo the subsequent procedures.

His care highlights the multidisciplinary approach we take at Children's Wisconsin and our ability to use advanced therapeutics to treat complicated disease in our tiniest patients.