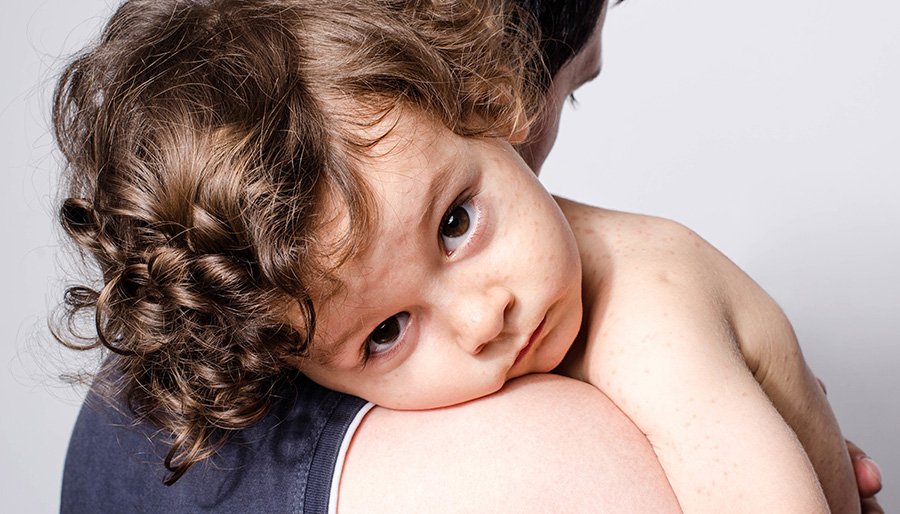 Measles outbreak shows importance of getting your kids vaccinated

The recent measles outbreak is a regrettable reminder to all of us of just how preventable this disease truly is when your child is vaccinated. Measles, also called rubeola, 10-day measles, or red measles, is a highly contagious viral illness that results in a rash, fever and cough.

The most serious complications from measles include the following:

Patients with poor immune systems or other illnesses will become very ill if they develop measles. Deaths have been reported.

Measles can be prevented with the MMR vaccine

The measles vaccine (called MMR, as it is often given in combination with the mumps and rubella vaccine) is generally given at 12 to 15 months old and then again between 4 to 6 years of age.

Once fully vaccinated, a child has a very low chance of becoming sick or spreading the germ to others.

Is the vaccine safe?

Some people avoid vaccines because they believe immunizations can make you sick. This simply isn’t true. Serious side effects are rare, and most vaccines only cause minor side effects. If a child gets a disease that could have been prevented with a vaccine, the risks to that child and other people is much greater than from any vaccine reaction.

If you choose not to vaccinate your child, you are not only putting your child at risk but other people and their children, as well, especially those with weakened immune systems. As recently as 2000, measles had been declared all but eradicated. Yet in 2014, as the anti-vaccine movement continued to grow, there were 644 reported cases. So far in 2019, there have been 127 reported cases. 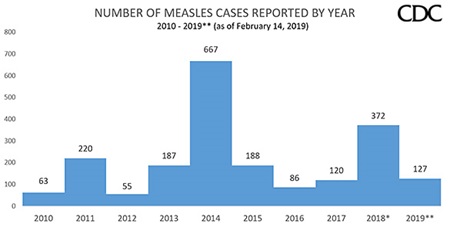 Measles spreads from one child to another through direct contact with discharge from the nose and throat. Sometimes it spreads through airborne droplets from an infected child. It occurs mostly in winter and spring. The lesions of rubeola are unique and usually allow for a diagnosis simply on physical examination.

It may take between eight to 12 days after exposure to measles for a child to develop symptoms. But it’s important to keep in mind that the virus is contagious long before that, meaning children could be contagious before they even know they have the disease.

During the early phase of the disease (which lasts between one to four days), symptoms usually resemble those of an upper respiratory infection. Each child may experience symptoms differently, but the following are the most common symptoms of measles:

The rash starts as small distinct lesions, which then combine as one big rash. After three to four days, the rash will begin to clear, leaving a brownish discoloration and skin peeling.

Symptoms may resemble other skin conditions or medical problems, so consult your child’s physician for a diagnosis.

Caring for a child with measles

Since it is a viral infection, there is no cure for measles. Treatment, which is aimed at prevention or decreasing the severity of the symptoms, may include:

Other ways to prevent measles from spreading:

Renee Szafir, MD Pediatrician Delafield Pediatrics
Children's Wisconsin wants the kids we serve to be the healthiest children in the nation. One of the best ways to keep kids healthy is to make sure they are protected from serious diseases with immunizations. The germs that cause these diseases are still around. Adhering to the recommended schedule for vaccines will help your kids stay healthy.