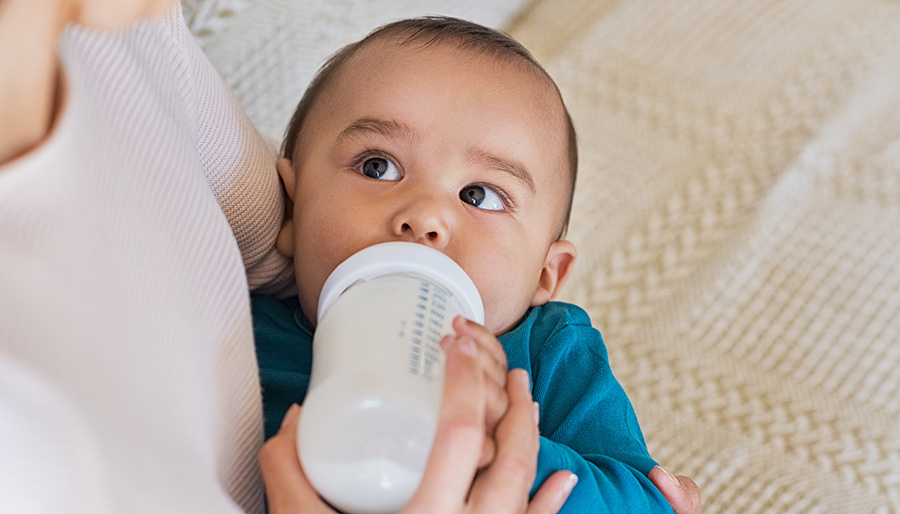 How to spot a cow’s milk protein allergy

Everyone knows that milk is a great source of nutrition for growing babies — but what about when it’s not?

If your infant is extra fussy after eating, is having digestive issues like diarrhea or constipation, or is spitting up a lot, they may have something called a cow’s milk protein allergy (CMPA). Although the name of this includes, "allergy," it acts more like an intolerance and it's important to note that this is very different from a cow's milk allergy, which can be serious and cause anaphylaxis. As a pediatrician, I would work closely with the Children's Wisconsin Allergy and Clinical Immunology Department for a cow's milk allergy, but that isn't always necessary with CMPA.

This blog is going to help explain CMPA, not a cow's milk allergy.

If your child has CMPA, know that most babies typically outgrow it.

As a pediatrician, not only do I see patients with CMPA, but it impacted my own family. My daughter had blood in her diaper at 6 weeks old, and of course, we were alarmed. However, I had a feeling that whatever was wrong would explain her fussiness and severe spit up over the previous month. A simple test helped confirm CMPA, and after two weeks of eliminating dairy from my daughter and wife's diet, the spit up was nearly gone and her stools were completely normal.

CMPA is an immune system reaction to the proteins (casein and whey) in cow’s milk. It can also happen with other animal milks. An infant’s new immune system mistakes the proteins as something harmful and attacks them rather than absorbing them for nutrition.

Thankfully, CMPA is not like other food allergies and does not cause anaphylaxis.

The most common symptoms of CMPA are digestive, including constipation, diarrhea or vomiting. Babies with CMPA will be extra fussy, especially after eating, or you may even see blood in their stool. These symptoms are typically delayed, but start within the first week of a child trying cow’s milk.

While there’s no known reason infants have CMPA (it’s not genetic or developed from a specific incident), tests can help determine if CMPA is causing your infant’s symptoms.

In addition to your child’s history and a physical examination, the two best tests for CMPA are a stool test and an elimination diet.

It can be helpful to track your child’s symptoms in relation to when they consumed cow’s milk or cow’s milk products. Use these notes when speaking with your pediatrician.

The most important thing is to work with your pediatrician to diagnose CMPA and better understand how it’s impacting your child. Once you’ve done that, a few additional tricks can help.

After a few months, it may be recommended to introduce cow’s milk again as it can be a great source of nutrition and, typically, children grow out of the allergy. Talk to your pediatrician about when to do this. They can help you know the best timing and what to look for. With the reintroduction of cow’s milk, your child might again experience an upset stomach or other digestive symptoms.

My family is actually working through reintroduction now so I know it can be worrisome, but it’s the only way to know if your child has grown out of CMPA.

If you suspect your child has CMPA, talk to your pediatrician. As long as your child’s symptoms are like those described above and not anaphylaxis with trouble breathing, you can start by calling your pediatrician to talk about options.

As frustrating as a very fussy baby or strict diet can be, know that CMPA is very treatable and will most likely not be a problem after a few months. After a short time, your child can grow up enjoying some great foods that come from cow’s milk.