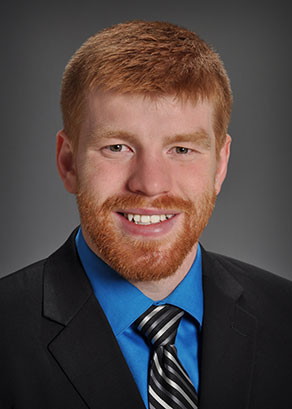 Tanner Flatland is a nationally certified and state-licensed athletic trainer who joined Children’s Wisconsin in 2016. He currently serves as a Licensed Athletic Trainer-Physician Extender with the Sports Medicine team.

A native of Wisconsin, Tanner grew up near Chetek, WI where he also attended high school. While participating in high school athletics, Tanner became interested in sports medicine and after high school attended Carroll University in Waukesha, WI. Tanner graduated from Carroll in May of 2013 with his Bachelor’s of Science in Athletic Training and shortly after worked as an Intern Athletic Trainer at Butler University in Indianapolis, IN for a year.

Following his time at Butler University, Tanner was employed at the University of Oregon as a Graduate Teaching Fellow, while pursuing his Master’s of Science in Human Physiology which he obtained June of 2016. Tanner’s primary responsibility was to provide high quality care for the University of Oregon athletes, including women’s soccer, acrobatics & tumbling, lacrosse, and men’s football. Tanner also taught orthopedic evaluation laboratory courses to undergraduate students during this time.

In his free time, he enjoys urban and rural exploring with his wife, daughter, and dog. He is an avid Packers, Badgers, and Oregon Ducks fan.