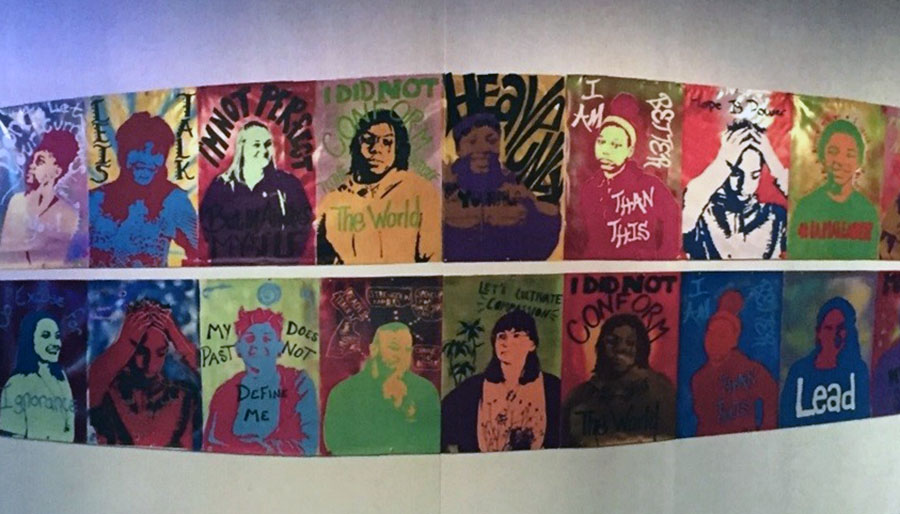 For young survivors of violence, Project Ujima uses art to help them heal

Those were just some of the messages young survivors of violent injuries paired with their portraits for the Peace Paper Project, the latest art collaboration between Children’s Wisconsin’s Project Ujima and University of Wisconsin-Milwaukee’s Peck School of the Arts.

For more than two decades, Project Ujima’s work has been driven by a singular goal: to stop the cycle of violent crimes that takes a toll on far too many of Milwaukee’s children, families and neighborhoods. The program, one of the first of its kind in the nation, was founded after emergency department doctors at Children’s Wisconsin noticed many young victims of gun shots, stabbings and physical assault became repeat victims of violence and needed treatment for more than their physical wounds. Project Ujima’s name is inspired by the Swahili word meaning “working together,” and that’s exactly what the program does as it serves families across Milwaukee County.

Art has always been woven into Project Ujima’s programming. “Building trust and relationships with children and families is a foundational component to a family’s engagement and requires creative, interactive approaches,” said Bridget Clementi, vice president of community health at Children’s Wisconsin. “Art in a variety of forms, from hip-hop therapy to spoken word, is one of the many tools Children’s Wisconsin regularly uses to help young survivors of violence through their healing journey.” 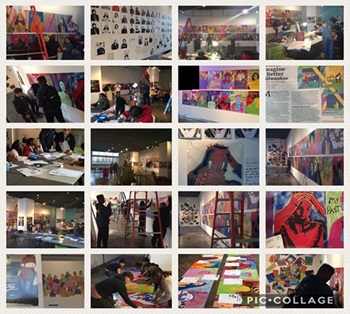 The UWM partnership, which was supported by the Peck School of the Arts’ Kenilworth Community Engaged Arts Initiative, was the first time that Project Ujima youth had partnered with outside artists. During the spring and fall semesters of 2018, 15 teens worked closely with Project Ujima staff and UWM art students and faculty on a peace banner and a series of survivor portraits.

Under the guidance of Raoul Deal, coordinator of UWM’s Community Art BA Program, and Michael Dale Bernard, adjunct assistant professor with the Digital Fabrication and Design Program, the group met once or twice a week for five weeks during the spring semester to create a 3x50-foot banner using photography, spray-paint, digital images and text.

“During the week between our first and second sessions, the tragic high school shooting in Parkland, Florida took place,” Deal said. “It was a sobering opportunity. The youth and university students decided to reach beyond creative self-expression and create something that could be used to make a difference in a larger context.”

The banner explored how violence affects our society and what youth could do to help change it, combining the art with phrases such as “I am better than this” and “My past does not define me.”

“We need to help folks to understand that we are all connected,” said Jermaine Belcher, the team lead for Project Ujima. “What happens in different neighborhoods affects all of us. That is not just their problem. This is everybody’s problem. We have to come together as a community and own this.” 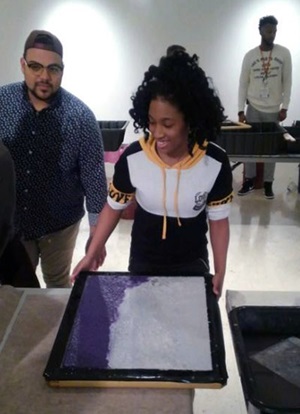 The art-making was a powerful experience for the youth.

“This project brought me a loooooonnnnggggg way from not just academics, but as a person. I can finally talk to people, not with violence or with words, but with art,” one 15-year-old participant wrote. “Maybe art could bring this world together, make everyone happy and not trying to fight each other, but help each and every one.”

The banner made its debut at the Peck School of the Arts’ Kenilworth Open Studios event in April and was displayed at a National Gun Violence Awareness Day event in June. The City of Milwaukee’s Office of Violence Prevention plans to exhibit the banner at City Hall in the future.

During the fall semester, Project Ujima and UWM students collaborated on the Peace Paper Project, an international initiative that uses traditional papermaking as a form of trauma therapy and community activism. Project Ujima youth and staff learned how to create paper out of clothing that was personally meaningful to them, such as an old blanket or a T-shirt of a lost loved one. They then used that paper to make self-portraits that were displayed at the Peck School of the Arts’ gallery in November.

“As the need for healing justice gains more and more relevance in our contemporary culture, partnerships such as ours are more crucial than ever,” Deal said. “They provide access to creative programming in a space where young people with difficult traumatic experiences can envision themselves as valued human beings, with lives that matter deeply to the health of our society. These workshops have provided sorely needed opportunities for reflection, positive relationship-building and creative self-expression.”

A formula for success

Art is just one of the ways that Project Ujima makes a difference in the lives of youth. The program uses individual, family and community interventions and prevention strategies to bring about healing, recovery and resilience. Children’s Wisconsin’s crime victim advocates first engage families when they arrive in the emergency room, and nearly 80 percent of families voluntarily enroll in Project Ujima’s services as a result. On average, the program serves more than 300 youth each year.

Young survivors of violent injuries score lower on measures of well-being than healthy youth and kids with chronic disease, including patients with cancer. But after as little as six weeks of programming, Project Ujima participants show improvements in psychosocial well-being, anger, anxiety and depression. The program is also successful in preventing repeat victimization. Participants have had a recidivism rate of less than 3 percent since 2004, compared with a national average of around 25 percent for youth violence survivors who are not in programming.

“I just want everyone to have positive mindsets and safe lives, to respect each other, love each other, and the golden rule: treat others how you want to be treated, no matter how mean or cruel they can be,” noted the 15-year-old Project Ujima participant. “Everyone needs a little bit of love in their life, and Ujima gave me that.”