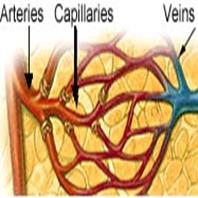 The capillaries in a capillary malformation:

The cause of capillary malformation is unknown. We do know that they are not caused by anything you did or didn't do during pregnancy.

How do doctors diagnose capillary malformations?

To diagnose capillary malformation, your child's doctor will examine the skin in the affected areas. In most cases, the doctor will not have to perform any special tests.

Capillary malformations only affect the skin, but they may be a sign of something more serious under the skin. If the malformation is on the face or spine or on top of swollen soft tissue, your child should see a pediatric specialist who is an expert in blood vessel birthmarks.

How do you treat capillary malformations?

Most capillary malformations do not need treatment. If you and your child's doctor elect treatment, there's a good chance that treatment will be with a pulsed-dye laser. Before choosing treatment, you should know that:

Below are some images that illustrate the potential effects of laser treatment.

What are the possible complications? 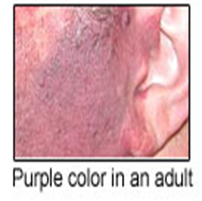 A capillary malformation may cause complications, such as:

Should I be concerned about my child's self-esteem?

Parents have a range of emotions when their baby is born with a birthmark, so no matter what you're feeling or thinking, understand that it's normal. If your child has a birthmark on his or her head or neck, people may stare, make rude comments or even accuse you of child abuse. All of those things have the potential of affecting your child.

Children often become aware of their appearance around 4 years of age. If you're worried about self-esteem issues related to your child's birthmark, watch for signs from your child. Some children try to hide their birthmark or suddenly refuse to go places they used to enjoy. Signs like that may indicate that your child feels uncomfortable with the birthmark.

There are resources that can help with the emotional aspects of a birthmark. The vascular anomalies team at Children's is one resource. The hospital also has Child Life specialists who can help. Sometimes family members like to talk to another family with the same concerns. If that's something you'd be interested in, our vascular anomalies team can help you make contact with another family.