Veins are blood vessels that carry low-pressure blood from the tissues back to the heart. A venous malformation occurs when veins in a part of the body are formed abnormally before birth. The malformed veins are usually missing muscle in their walls, causing them to gradually expand or enlarge and form masses or areas of swelling. When the major veins are affected, their valves may not function, causing venous insufficiency. When the skin is involved, it appears blue to deep blue/purple. Because of slow blood flow, blood clots can form in the venous malformation. The clots may be painful, and can lead to further swelling. These blood clots do not usually travel to other parts of the body.

Where do venous malformations appear?

How do doctors diagnose venous malformations?

A venous malformation is confirmed by an MRI or an ultrasound test. The doctor may also want to do a small skin biopsy. 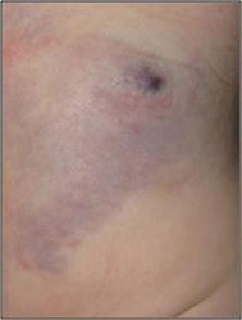 What problems could the malformation cause?

How are they treated?

A venous malformation does not need to be treated if it is not causing any problems, but it will not go away without treatment.

Call your child's doctor, nurse, or clinic if you have any concerns or if your child has: