Anomalous origin of a coronary artery 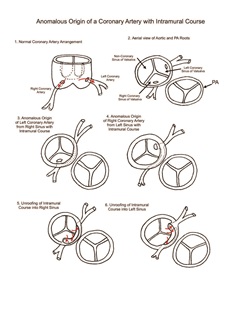 The coronary arteries arise from the root of the aorta and carry oxygenated blood to the cardiac muscle. The normal aortic valve has three cusps that open during systole and close during diastole. Each cusp is associated with its own sinus of valsalva, a slight bulging of the aortic root that provides support for the cusp. The left coronary artery ostium arises from the left sinus of valsalva. The right coronary ostium arises from the right sinus of valsalva, and the third or “non” sinus of valsalva has no coronary ostium associated with it. The meeting point of each of the cusps with its neighboring cusps is called a “commissure.” The left coronary artery supplies primarily the left ventricle and ventricular septum, and the right coronary supplies primarily the right ventricle. Rarely, a child might be born with an anomaly of this arrangement. Two anomalous patterns have been implicated in sudden cardiac death. Origin of the left coronary system from the right sinus of valsalva with an intramural course, and origin of the right coronary system from the left sinus of valsalva with an intramural course. Inadequate flow through the anomalous artery is likely due to the abnormally shaped opening of the artery where it connects to the aorta and/or compression of the intramural segment from pressure within the aorta. Ischemia, arrhythmia, and syncope/sudden death can occur. Surgical “unroofing” of the anomalous coronary provides unobstructed blood flow to both coronary systems, thus preventing cardiac ischemia.

Surgical “unroofing” of the anomalous coronary requires median sternotomy and institution of cardiopulmonary bypass. Following aortic cross- clamping and administration of cardioplegia, the aortic root is opened and inspected. The anomalous coronary path is identified with fine probes. The relationship between this pathway and the aortic valve commissure between the right and left coronary sinuses of valsalva is assessed. Repair/ Unroofing must be carried out without damaging this commissure. Cardiopulmonary bypass time and aortic cross-clamping time required to complete repair are usually short to moderate.

The postoperative course following this procedure is usually uncomplicated. Extubation is usually accomplished in the operating room prior to transfer to intensive care. Invasive monitors used include arte- rial and central venous lines. Intracardiac monitoring lines are rarely needed. Non-invasive use of pulse oximetry and NIRS probes for monitoring cerebral and global perfusion are used on all cardiac surgical patients in the early postoperative period. Vasoactive infusions are occasionally used and might include milrinone. Excessive postoperative bleeding and arrhythmia are rare. Hospital stay following surgery is usually 4 to 7 days.