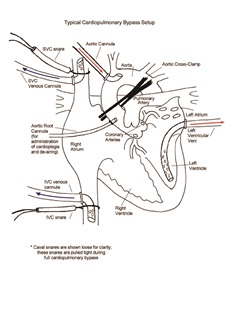 Many operations performed to correct congenital heart defects require that the flow of blood through the heart, pulmonary arteries, or aorta be stopped temporarily—either to open one of these structures or to stop the heart from beating to allow surgery. To safely stop blood flow through the heart, the surgeon must provide an alternative means of circulation for the body and thus will employ a technique called cardiopulmonary bypass (CPB). This involves diverting venous blood away from the heart to an oxygenator, where oxygen is added to the blood and carbon dioxide is removed; the blood is then returned to the aorta. Hence, the blood “bypasses” the heart and lungs. Cardiopulmonary bypass is instituted by inserting plastic tubes called “cannulae” into the heart chambers or blood vessels of the heart. These cannulae are attached to the cardiopulmonary bypass circuit. By convention, the term “open heart surgery” refers to any cardiac operation that requires the use of CPB.

The bypass machine is managed by a team of perfusionists. Pediatric perfusion requires that the processes and mechanisms be tailored to the size and physiology of each child.

A typical operation performed to correct congenital heart disease starts with preparation of the heart and main blood vessels for institution of cardiopulmonary bypass. A “purse-string” suture is placed in the surface of the aorta. A cannula is inserted into a stab incision in the center of the purse-string. The strings are then pulled tightly through a rubber sleeve, securing the blood vessel or heart tissue tightly around the cannula. This allows for an air-tight seal around the cannula, so blood cannot leak out and air cannot enter. The first purse-string is placed in the surface of the ascending aorta. Next, purse-strings are placed in the superior vena cava and then inferior vena cava, near the entrance of these vessels to the heart. Alternatively, a single right atrial purse-string can be used for certain operations that do not require the atrium to be opened. Bicaval cannulation is useful for most congenital heart surgery operations since the right-sided heart structures are often entered. When cannulae are placed in the cavae directly, an umbilical tape is passed around each vena cava. The umbilical tapes are brought through a large rubber sleeve and pulled securely to cinch the caval wall around the cannula. This creates a tight seal between the vessel wall and the cannula, so that air is not entrained into the venous cannulae when the heart is opened. Venous return to the bypass pump is usually a gravity-fed siphon. If air is allowed into the venous return tubing or cannulae, the siphon is broken, and cardiopulmonary bypass must stop.

Instituting cardiopulmonary bypass requires heparin to prevent formation of clots. Heparin is given prior to inserting the cannulae. Following completion of the surgical repair and after CPB has been terminated, a medication called protamine is administered to reverse the anticoagulation effects of heparin. An activated clotting time test (ACT) is used to monitor the effects of heparin and its reversal. A blood heparin assay is also performed, allowing identification of residual heparin in the blood.

The cardiopulmonary bypass oxygenator has many layers of very fine, thin, gas-permeable fibers or a thin membrane. Blood passes through the oxygenator, and oxygen passes through the fibers or membrane. Gas exchange occurs on the surface of the fibers or membrane. Oxygen is added to the blood, and carbon dioxide is removed. The oxygenator of the cardiopulmonary bypass machine functions like the alveoli of the human lung. A heat exchanger is incorporated into the system to allow the perfusionist to adjust the blood (and body) temperature as needed for the operation. Most operations for congenital heart disease are carried out at moderate hypothermia (26°–34° C), but some operations require cooling to profound hypothermia (~15° C). More extreme hypothermia is required for operations that require turning off the bypass machine for a brief period. This is called deep hypothermic circulatory arrest, or DHCA. During DHCA, there is no circulation of blood in the body at all. To minimize the potential for injury to the brain and other vital organs during the period of circulatory arrest, cellular metabolism is reduced to its absolute minimum by extreme cooling of the patient prior to the cessation of pump flow. Antegrade cerebral perfusion is used to provide cerebral blood flow during periods of circulatory arrest to mitigate potential brain injury.

The volume of the cardiopulmonary bypass tubing and oxygenator must be considered when performing open-heart operations on pediatric patients. Since the patient’s blood volume effectively becomes the sum of the bypass machine volume and the patient’s blood volume, in small children it is necessary to add blood to the “priming” volume in the bypass circuit to prevent potentially dangerous dilution of the blood. Adults and older children have much higher blood volumes; as the ratio of patient blood volume to bypass machine blood volume increases, non-blood prime becomes more feasible. All efforts are made to minimize bypass prime volume to allow for bloodless surgery in smaller and smaller patients. Once cardiopulmonary bypass is initiated and cooling has commenced, a “cross-clamp” is placed across the aorta between the aortic valve and the site of insertion of the aortic cannula, but distal to the origin of the coronary arteries. A small cannula is placed in the aortic root proximal to the aortic cross-clamp with another purse-string. It is used to inject a cold, high-potassium solution (called cardioplegia) into the aortic root. Since the aortic cross-clamp prevents the solution from going into the systemic circulation, and a competent aortic valve prevents the solution from entering the left ventricle, the cardioplegia has nowhere else to go but into the coronary arteries, where it is distributed to the heart muscle evenly. Because of the high potassium concentration in the cardioplegia, cardiac electrical and mechanical activity ceases, and the cold temperature of the solution reduces cardiac metabolism to minimal levels. This is important because the heart is deprived of oxygen and nutrients while the cross-clamp is on. Because the effect of the cardioplegia is temporary, it must be re-dosed at regular intervals during the operation.

During the cardiac arrest phase of the operation, the myocardium is kept very cool. Sterile saline ice slush is placed around the heart to further ensure complete cooling of the heart. When the heart muscle is cool, myocardial oxygen demand is minimal. This allows for extended periods of cold cardiac arrest. It is during this phase of the operation that complex intracardiac operations can be performed. At normothermia, deprivation of cardiac oxygen supply will result in rapid myocardial cell injury and even death. When cold cardioplegia and cardiac arrest are employed, myocardial integrity is maintained safely for hours. Following completion of the intracardiac phase of the operation, the heart is re-perfused by removing the aortic cross-clamp. With removal of the aortic cross-clamp, blood from the cardiopulmonary bypass machine is allowed to perfuse the coronary arteries. Blood supply to the myocardium is resumed, and the heart soon starts to beat normally. A period of “pay- back time” ensues during which the metabolic stores of the heart muscle are re-charged. This pay-back time allows the heart to regain normal function by beating while empty (since the left ventricular vent keeps the blood removed from the heart). This pay- back time is usually approximately equivalent to half of the total “cross-clamp” time.

Following intracardiac repair and during the pay- back period, the perfusionist actively warms the blood as it passes through the bypass circuit, and the body temperature slowly returns to normal. During this phase of the operation, the snares placed around the venous return cannulae are removed. Some blood is now allowed to enter the heart around the venous return cannulae. This process is called “partial cardiopulmonary bypass.” The heart is allowed to process a small amount of blood in preparation for separation from bypass.

Following complete rewarming of the body and blood and completion of the pay-back process, vasoactive infusions that may be required for support of post- operative hemodynamics are started.

Separation from cardiopulmonary bypass support is carried out by slowly restricting the venous return to the bypass machine, allowing more and more blood to be pumped by the heart. The roller pump that pumps blood into the aorta is slowed. Eventually, venous return to the bypass machine is reduced to zero and aortic perfusion by the pump is stopped. The patient is now “off bypass.” The hemodynamic state is optimized with the use of vasoactive infusions and manipulation of cardiac preload and afterload.

After completion of CPB, many centers use a technique known as “modified ultra-filtration” (MUF) to salvage blood from the heart lung machine, hemoconcentrate the patient’s blood, and remove harmful inflammatory mediators called cytokines. MUF is performed immediately following separation from cardiopulmonary bypass. The MUF process takes about 10 to 15 minutes, and it is common to see gradual improvement in hemodynamics as the process progresses.

Myocardial performance following open-heart surgery depends on many factors, but is particularly influenced by the duration of cross-clamping, the adequacy of myocardial protection during the cross- clamp interval (by cardioplegia and cooling), and the adequacy of the surgical repair. Thus, the efforts of the surgical team are directed at achieving the shortest cross-clamp time, the best myocardial protection, and the best technical operation to optimize the function of the heart.

Cardiopulmonary bypass and deep hypothermic cardiac arrest have allowed successful repairs of complex cardiac anomalies. Despite this, certain adverse effects occur with any use of extracorporeal circulation (circulation provided by mechanisms external to the body). Continuing improvement in bypass technology has helped to minimize its deleterious effects, and continuing research offers hope that cardiopulmonary bypass will continue to grow safer.