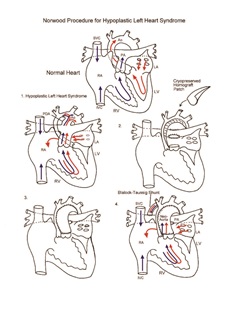 Hypoplastic left heart syndrome (HLHS) is a spectrum of abnormalities characterized by underdevelopment of the left ventricular outflow tract, resulting in critical aortic valve stenosis or atresia. Concomitant and variable degrees of hypoplasia of other left-sided heart structures, including the mitral valve, left ventricle, ascending aorta, and aortic arch also occur. Coarctation of the aorta is a nearly universal finding. The newborn with HLHS is dependent upon a patent ductus arteriosus for systemic perfusion. All of the cardiac output (both systemic and pulmonary) is ejected from the right ventricle, and the distribution of blood flow to the systemic and pulmonary circulations is determined by their relative resistances (parallel circulation). The pulmonary vascular resistance drops shortly after birth and can result in excessive pulmonary blood flow at the risk of inadequate systemic perfusion, even with a patent ductus arteriosus. In addition, these patients are at risk for development of inadequate systemic blood flow due to ductal closure. Without intervention, HLHS is uniformly fatal within the first weeks of life. 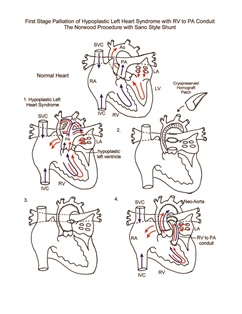 First stage palliation of HLHS requires cardiopulmonary bypass, aortic cross-clamping, and a brief period of hypothermic circulatory arrest or antegrade cerebral perfusion. Relief of systemic obstruction is accomplished by using the pulmonary root for outflow. Connection with the native aorta is necessary for coronary blood flow and growth of the ascending aorta. All ductal tissue is resected, and the descending thoracic aorta is connected to the proximal aortic arch. Further augmentation of the ascending aorta, arch, and proximal descending thoracic aorta is accomplished with pulmonary homograft. Pulmonary blood flow is provided by placement of a modified Blalock-Taussig shunt. Alternatively, a conduit can be placed from the right ventricle to the pulmonary artery to provide pulmonary blood flow (Sano modification). Delayed sternal closure is commonly used. Cardiopulmonary bypass time and aortic cross-clamp time required to complete first stage palliation are usually moderate in length. Continuous cerebral perfusion is used to minimize duration of circulatory arrest.

In recent years there have been significant improvements in the outcome of patients undergoing stage 1 palliation of HLHS. These patients, however, continue to present a unique challenge. Intersecting vulnerabilities include exposure to profound hypothermia, with the potential for excessive capillary leak syndrome and coagulopathy. In addition, there is inherent inefficiency of parallel circulation and diminished reserve of the single right ventricle. Postoperative bleeding is a common complication due to post cardiopulmonary bypass coagulopathy and the extent of suture lines exposed to systemic pressure. Invasive monitors used include arterial and central venous catheters. Atrial lines are used when needed for access and/or hemodynamic management. Measurement of preload to the ventricle allows for titration of volume replacement and adjustment of vasoactive infusions. Non-invasive monitors include NIRS (near infrared spectroscopy) probes to assess adequacy of regional and global perfusion and traditional pulse oximetry. Vasoactive agents might include epinephrine and/or milrinone. Numerous other agents are available and are tailored to the specific needs of the patient, targeting adequate oxygen delivery to the tissues of the body and optimization of cardiac output.

Intensive care unit stay following stage 1 palliation is generally 1 week to 10 days. The remainder of the hospital stay focuses on adjustment of oral heart failure medications (ACE inhibitors, digoxin, and lasix) and feeding. Achieving adequate intake with oral feedings can be difficult due to a combination of impaired circulation and airway issues, such as recurrent laryngeal nerve injury. Nasogastric supplementation is commonly used in the hospital, but because of the risk of aspiration, patients are not discharged until they demonstrate weight gain with oral feedings or, failing this, a gastrostomy tube is in place. Length of hospital stay required following surgery averages 3 weeks in the current era.

The months following first stage palliation are especially critical. Survival during the interim period between first and second stage surgery has been improved with a home monitoring protocol following daily oxygen saturation, weight, and careful monitoring of oral intake. Attention to changes in these parameters and surveillance for intercurrent illness have improved interstage survival. 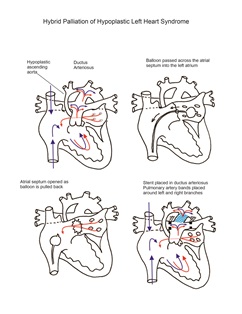 An alternative to traditional stage-one palliation described above employs a hybrid approach utilizing both catheter-based interventions and surgery. In a hybrid lab, the interventional cardiology team places a stent in the ductus arteriosus and frequently performs balloon atrial septostomy. The surgical team then performs median sternotomy and places pulmonary artery bands on the left and

right pulmonary artery branches. This approach achieves the goal of stabilizing pulmonary blood flow and providing unobstructed inflow of pulmonary venous blood to the heart and outflow to the systemic organs. Cardiopulmonary bypass is not required. This reduces associated risks, including inflammation and bleeding. Care must be taken to assure unobstructed retrograde flow to the coronary root and head vessels, particularly in the setting of aortic atresia. Additionally, precise placement and tightening of branch pulmonary bands is challenging, particularly in getting the perfect balance of reduced pulmonary blood flow without excessive constriction. Branch PA reconstruction or catheterization intervention is often required following PA debanding. One other disadvantage to this approach is the need to remove the stent at the time of the next surgery. Stent removal might necessitate significant additional reconstructive measures to the pulmonary artery, aorta, or both.

This hybrid approach is used variably between centers, with some using it as their procedure of choice for all infants. Many others use it more selectively, particularly for neonates in whom traditional stage-one palliation might be considered too risky due to preoperative status and/or other physiologic challenges, such as small size, shock, infection, renal failure, necrotizing enterocolitis, or other neonatal challenges. When used as a palliative procedure with plans for a traditional stage-one procedure in a few weeks, PGE1 can be used to provide ductal patency. When used instead of a traditional first stage palliation, ductal stenting is performed. The second stage comprehensive procedure performed at 4–7 months would include bidirectional Glenn shunt, aortic arch reconstruction, stent removal, and pulmonary artery branch band removal and reconstruction. 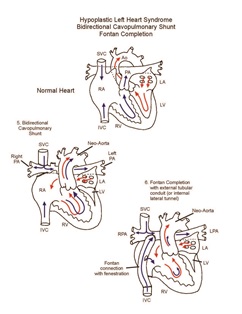 The ultimate goal for the single ventricle patient is Fontan circulation, in which systemic venous return is routed directly to the pulmonary arteries. This reproduces as closely as possible the normal circulatory pattern. The driving force for pulmonary blood flow is provided by mildly elevated venous pressure. Successful single ventricle palliation is predicted by low resistance to pulmonary blood flow, good systolic and diastolic ventricular function, absence of atrioventricular valve insufficiency, and sinus or atrioventricular sequential rhythm. Particularly in the patient with HLHS, improved Fontan survival is achieved with a staged approach that includes a superior cavopulmonary anastomosis (bidirectional Glenn shunt or hemi-Fontan). The bidirectional Glenn shunt is performed at four to six months of age; the previously placed systemic-to-pulmonary shunt is removed at that time. 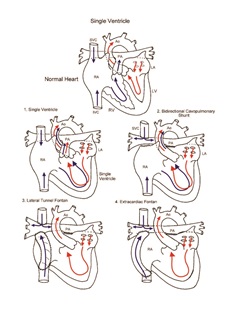 The postoperative course following the bidirectional Glenn shunt is usually uncomplicated. Pulmonary blood flow changes from parallel to a more normal in-series arrangement. In addition, the source of pulmonary blood flow is more greatly desaturated venous blood rather than an arteriovenous admixture. Improved hemodynamic efficiency, combined with a reduction in volume load on the single ventricle, are hemodynamic benefits that result in a stable postoperative course. Because of the generally beneficial impact of the bidirectional Glenn shunt on the single ventricle patient, recurrent or residual lesions such as aortic arch obstruction, obstruction of the branch pulmonary arteries, restrictive atrial septal defect, or tricuspid valve insufficiency are frequently approached at the time of second stage palliation. These additional procedures may complicate the postoperative course.

Invasive monitors used include arterial and central venous catheters. Atrial lines are used when needed for access and/or hemodynamic management. Measurement of preload to the ventricle allows for titration of volume replacement and adjustment of vasoactive infusions. Non-invasive monitors include NIRS (near infrared spectroscopy) probes to assess

adequacy of regional and global perfusion and traditional pulse oximetry. Vasoactive agents might include epinephrine and/or milrinone. Numerous other agents are available and are tailored to the specific needs of the patient, targeting adequate oxygen delivery to the tissues of the body and optimization of cardiac output. Systemic hypertension is common following the bidirectional Glenn, and nitroprusside is commonly used to control blood pressure in the immediate postoperative period. The pressures in the superior vena cava and left atrium are routinely monitored. Superior vena cava pressure will be elevated, and the postoperative hemodynamics can be predicted to some extent by the patient’s preoperative hemodynamics and the magnitude of any concomitant procedures. Persistently elevated central venous pressures may be the result of anatomic obstruction in the bidirectional Glenn, branch pulmonary artery stenosis or hypoplasia, elevated pulmonary vascular resistance, or increased intrathoracic pressure, all of which would be associated with an elevated transpulmonary gradient (superior vena cava pressure minus atrial pressure). Ventricular dysfunction, tricuspid valve insufficiency, or non-sinus rhythm are causes of an elevated atrial pressure that will result in an elevated superior caval pressure despite a normal transpulmonary gradient. Persistently elevated SVC pressure will become intolerable because of head and upper extremity edema, as well as persistent pleural effusions and interstitial lung infiltrates that result from the inability of the pulmonary lymphatics to drain into the hypertensive central veins. This picture is often accompanied by arterial oxygen desaturation because, despite elevated central venous pressure, pulmonary blood flow is inadequate and pulmonary gas exchange is impaired. A low central venous pressure with cyanosis may indicate that there is an important venovenous collateral decompressing the superior vena cava. Elevated SVC pressure with increased arterial saturation may indicate that a large aortopulmonary collateral artery is present. Persistent abnormalities of the superior caval pressure, transpulmonary gradient, or arterial saturation merits investigation with echocardiography or cardiac catheterization. Length of hospital stay required following the bidirectional Glenn shunt procedure averages 5 to 7 days and may be increased in younger patients.

Within a few years of the bidirectional Glenn shunt, patients will develop worsening cyanosis due to differential growth of the lower half of the body with a corresponding increase in the desaturated inferior vena cava venous return, as well as the development of venovenous collaterals and/or arteriovenous malformations. Therefore, completion Fontan is undertaken electively for patients with HLHS at around 2 years of age.

Higher pulmonary vascular resistance is common in the early postoperative period as a consequence of the inflammatory response to cardiopulmonary bypass. It may lead to elevated central venous pressure and decreased pulmonary venous return (and therefore reduced systemic ventricular preload), resulting in low cardiac output. Placement of a fenestration (intentional hole) in the Fontan baffle allows for some blood to shunt from the systemic venous side to the pulmonary venous side without passing through the pulmonary vascular bed. This right to left shunting allows for maintenance of systemic output—even in the face of elevated pulmonary vascular resistance, albeit with a lower arterial oxygen saturation.

Sinus node dysfunction is common following Fontan completion and may be the result of direct injury to the sinus node or its blood supply, as well as alteration of normal intra-atrial pressures. Arrhythmias are poorly tolerated in this group of patients. Temporary atrial and ventricular pacing wires are routinely placed, and implantation of a permanent pacemaker is occasionally required.

Anticoagulation is usually initiated following Fontan completion surgery. Slower venous transit through long segments of prosthetic material makes these patients especially susceptible to thrombus formation. Coumadin is usually started once intracardiac lines have been removed. Anticoagulation following the bidirectional Glenn shunt is less rigorous and might include aspirin or dipyridamole, depending on cardiologist and surgeon preference. Usual pre- discharge medications include digoxin, lasix and captopril.

Average length of hospital stay required following the Fontan completion is 7 to 10 days.