One and a half ventricle repair 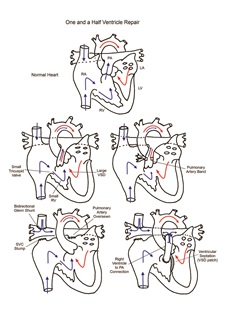 Each year we are presented with patients exhibiting a wide variety of congenital cardiac anomalies. Careful analysis of the specific features of each patient’s anatomy usually allows for a clear plan for surgical approach. Biventricular repairs are preferred when anatomy allows. When atresia or severe hypoplasia of a ventricular chamber or inflow valve precludes a biventricular approach, the single ventricle pathway is chosen. An initial surgery is frequently required and is aimed at regulation of durable pulmonary blood flow and unobstructed systemic blood flow, targeting optimal systemic oxygen delivery to the tissues of the body. Subsequent bidirectional Glenn shunt and ultimate Fontan completion are the rule.

In some cases the pathway chosen doesn’t fit neatly into either category described above. Some patients are more efficiently managed using a “one and a half” ventricle repair. The advantages include improved functional outcomes compared to patients with Fontan circulation, as well as mitigation of the negative long-term sequelae inherent to Fontan circulation. Cardiac anatomic subtypes to which this might apply include patients with:

Most operations involving the one and half ventricle approach require cardiopulmonary bypass and aortic cross-clamping. Cross-clamp times vary depending on the specific operation being performed, but are often moderate in length. Invasive monitoring includes arterial and central venous lines. Intracardiac lines might include a left atrial monitoring catheter. NIRS probes are used as a non-invasive reflection of systemic oxygen delivery and cardiac output. Vasoactive infusions might include epinephrine and milrinone. Various other vasoactive infusions are used depending on the specific patient’s needs, targeting adequate oxygen delivery to the tissues of the body and optimal cardiac output. Pacing wires are used as needed, as cardiac rhythm disorders are possible depending on the specific operation performed. Postoperative hospital stay ranges from 5 to 10 days.