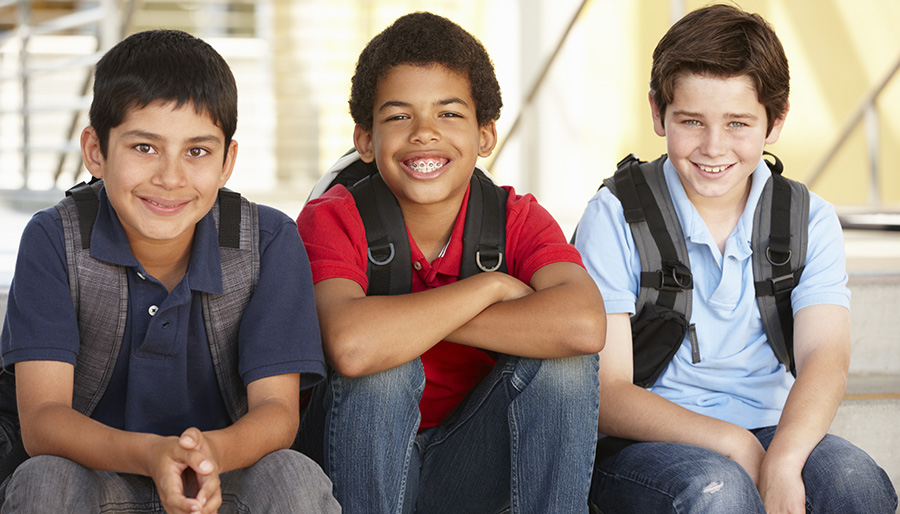 Puberty is a time of change. Physical change, to be sure, but it’s also a time of mental, emotional and social change. That’s true for all of us.

As your son’s body and mind develops from being a kid to being an adult, it’s good to have an understanding of what types of things he’ll be experiencing along the way. Every boy has his own journey and becomes a man in his own way, but along that road, there are a lot of changes every young man goes through.

From a physical, scientific standpoint, the goal of puberty is the ability to reproduce. Socially and emotionally, it’s the time that prepares a teenager for adulthood.

For boys, puberty can start between 10 and 13 years old. While it’s common for boys to start puberty later and move at a slower pace than girls, everyone is on his or her own developmental timeline. This pace and timeline is determined mostly by genetics — when and how other men in the family have gone through puberty is usually a good guideline. Puberty for boys is generally completed in two to five years, usually by age 19.

Hormones are responsible for much of the physical changes in puberty. Usually, the first sign puberty has begun for boys is growth of the testicles. Next steps that follow include the penis getting longer and wider, and the skin of the scrotum (the sac that contains the testicles) getting thinner. Pubic hair will start to grow at the base of the penis and scrotum, and the testicles will begin to hang lower, the left more so than the right.

The ability to get erections is another part of boys’ sexual development during puberty, as is ejaculation. Boys can get erections and ejaculate a small amount of sperm at night while they sleep, which is commonly called a “wet dream.” Be sure to let your son know to anticipate this and stress that it’s perfectly normal. This phase is called “spermarche” and it marks his physical ability to reproduce, similar to a girl having a period.

Hormones will cause many body changes such as in height, skin and other systems. Both boys and girls will grow more significantly during this time of adolescence than just about any other time of life. These growth spurts, when he may grow up to four (or more) inches per year, generally last two to three years, at which point he’ll nearly have reached his adult height. This can sometimes be awkward, as arms and legs can grow before the torso does, resulting in clumsiness or even the occasional injury.

Boys’ voices will also begin to get deeper, occasionally cracking along the way for a short period. Eyesight can also change when eyes grow, and some teens will find they need glasses or contact lenses, so be sure he is seeing his doctor once a year for vision testing.

Body hair growth is another change that happens for boys, and will occur on the underarms, face, arms, legs and chest. Provide him easy-to-use options for shaving when he is ready. Body odor and acne are also likely to develop, so it is important for boys to practice good hygiene, bathe and wash their face every day, and start using antiperspirant or deodorant. Feet can also be impacted, so he may need to change his socks more often, especially when playing sports.

Commonly, boys can develop some mild breast enlargement during puberty. This is called gynecomastia and in most cases there is no serious underlying problem and it will go away on its own. Your son’s pediatrician can monitor this. Thicker shirts can make gynecomastia less visible and weight lifting can help balance out the shape of the chest muscles.

To prepare for puberty, it’s just as important for parents and teens to be mindful of the upcoming social and emotional changes as it is the physical changes. Most boys will go through various phases of social interactions during puberty and anticipating those will help parents and teens find common ground when setting boundaries. Social anxiety often peaks in middle school years and typically improves over time, but is something to monitor throughout the entire teenage years.

As boys get older and their social lives develop, their need for independence will gradually increase and their desire for individuality will change. Often, around 8th grade, boys may begin trying new things, experimenting and taking more risks. This can mean things like vaping, smoking, marijuana and alcohol could become of interest, especially in social situations. Risk-taking behavior while driving may occur in later teen years.

Knowing your son’s need for thrill will help you engage him in positive outlets for this energy and may reduce risk-taking behaviors. High intensity outlets may include sports, summer recreation programs or even improv and theater.

For some, puberty can be an emotionally trying time. It’s a time of change and upheaval and that can manifest itself in many ways emotionally. There can be concerns over physical changes that are occurring, mood swings, rejection of childhood things, interdependence-dependence conflicts with parents, and a prevailing sense of being “center stage.”

Feelings of sadness, anger or depression can be normal parts of the teen years, but can also be signs of more serious mental health issues. Persistent negative emotions, especially if interfering with his ability to function at school, work or with peers should be evaluated by a professional.

All these changes that are happening can feel overwhelming for parents and boys alike, but toward the end of adolescence, boys often have a better understanding of their adult role in society, as well as a more established, realistic self-identity and an understanding of their own vulnerability and limitations. And along the way, he can develop life-long friendships, have formative experiences and can find interests, causes and hobbies to be passionate about that he can carry into adulthood.

However these changes unfold, remember there is a wide range of normal. In rare cases, however, kids who start developing very early or very late or have extremes in emotions may have a medical problem that requires treatment. If at any time you have a question or are concerned about your son’s development, talk to your child’s doctor. You can also call our Teen Health Clinic, which has specially trained staff who help teens and young adults manage all the health problems they may face — from routine to serious. Above all, keep the conversation about puberty open, honest and ongoing, both with your providers and with your kids.