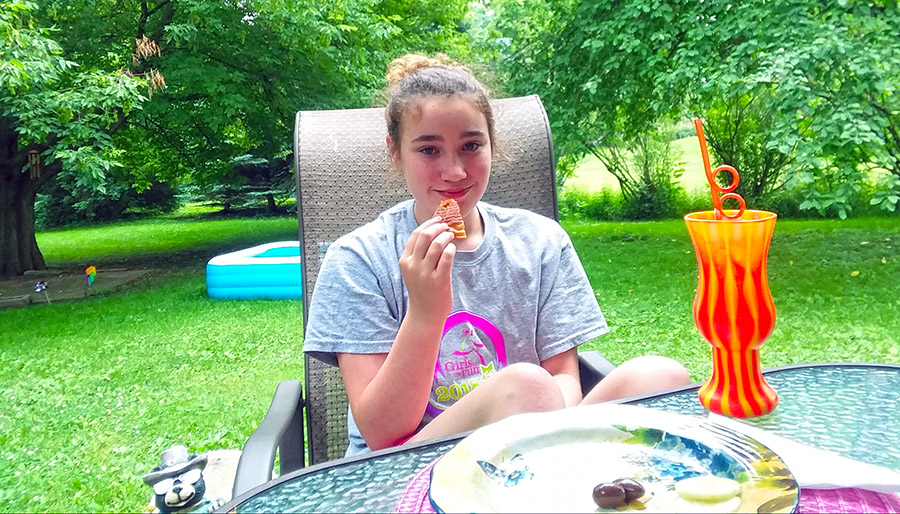 Special diets can provide relief for kids with epilepsy

The day before Valentine’s Day 2014 is a day Elizabeth Dukish won’t ever forget. It was a cold, snowless Thursday in Fond du Lac. It was her birthday and she had taken off work. And it was the day her daughter’s seizures started.

Abigail was 6 years old at the time. She hadn’t been feeling well the night before so she was sleeping in bed with her mom. Elizabeth remembers waking up early to the feeling of dampness. Abigail had wet the bed, something she hadn’t done in years.

Elizabeth called Abigail’s name to wake her up, but she didn’t respond. Abigail was generally a pretty heavy sleeper, so this wasn’t terribly out of the ordinary. Elizabeth shook her gently — then harder — but still nothing.

“I kept shaking her and calling her name,” said Elizabeth. “At first she opened one eye a smidge and lifted her head. Her eyes rolled around and she stared blankly for a moment. Then she closed her eyes and put her head back down, moaned and fell back asleep.”

“That’s when I started freaking out,” said Elizabeth. “I immediately got her up and we rushed to urgent care.” 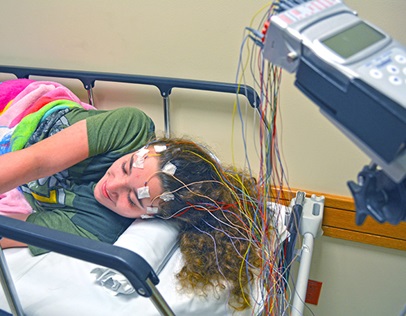 Their local urgent care wouldn’t see Abigail because she was a pediatric patient and they instructed her to call her pediatrician. Sensing Abigail needed immediate help, Elizabeth took her to a nearby emergency room. The doctor determined that the blood was caused by her biting the inside of her cheek, prescribed an antibiotic and discharged her.

After dropping Abigail off at home, Elizabeth was driving to the pharmacy to fill the prescription when she received a frantic phone call from her mother telling her Abigail was having a seizure. She immediately turned the car around and in the few minutes in took her to get home, Abigail had two additional seizures and was again unresponsive. They called an ambulance and took her back to the ER, and she was transferred to Children’s Wisconsin.

“Abigail has what we call primary generalized epilepsy,” said Hema Patel, MD, Abigail’s neurologist at Children’s Wisconsin. “That means we cannot find a physical cause. These epilepsies are genetically determined and affect otherwise healthy people. Her MRIs have always been normal.”

The next three years were a whirlwind of doctor visits, hospital stays and medications — all did little to ease Abigail’s symptoms. At her worst, Abigail was having seizures every couple of days. She’d twitch, crumple to the ground unexpectedly and have trouble speaking and remembering. Finally, in August 2017, Elizabeth was ready to try an alternative treatment option — a new diet.

“Dr. Patel actually suggested the modified Atkins diet many times, but I declined. Abigail was a picky eater and rarely ate meat so I felt overwhelmed wondering how I would find enough food for her to eat that fit in the 15 gram net carb limit,” said Elizabeth. “But once I figured out what I was doing, it has been smooth sailing.”

The modified Atkins diet (MAD) is a more moderate version of the traditional ketogenic diet. For many kids with recurring seizures for whom medication is not working, these highly restrictive, specialized diets have been shown to drastically reduce seizure activity — in some cases, seizures are entirely eliminated.

“After kids don’t respond to two seizure medications there is a less than five percent chance that any seizure medication will be effective,” said Angie Edlbeck, MS, RD, CSP, clinical dietitian specialist at Children’s Wisconsin’s Neurosciences Center. “These diets are significantly more effective than trying more and more medications once you’ve tried two. More than 50 percent of kids will see a greater than 50 percent improvement in their seizures. And about 10-15 percent will go completely seizure-free.” 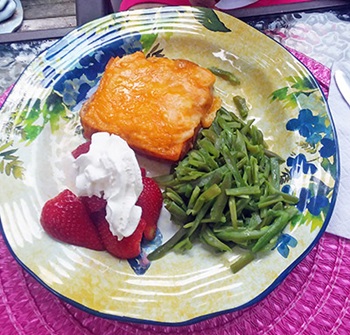 The main principle of the modified Atkins or ketogenic diet is an emphasis on high-fat foods while cutting out foods higher in sugar and carbohydrates. That means more butter, mayonnaise, heavy cream and cheese and no bread, beans, fruit and many vegetables (primarily those that grow under the ground). The bulk of calories — between 65-90 percent depending on the diet — come from fat with some protein added to help promote growth and development.

Angie typically recommends the classic ketogenic diet for kids whose parents are in charge of what they eat — infants, children with feeding tubes or older patients who have developmental delays. Typically, once a child is about 2 years old, Angie moves more toward the modified Atkins diet.

While the modified Atkins diet is still based on low-carb principles, it’s far less strict than a traditional ketogenic diet. Instead of weighing every piece of food for every meal (for example, a keto meal might be 70 grams of all-beef hot dog, 15 grams of fruit, 30 grams of heavy cream and 21 grams of mayonnaise), the only restriction on the modified Atkins diet is a daily carb limit of 10-20 grams per day depending on age.

For Abigail, a typical breakfast is a ham and cheese quiche (prepared ahead of time in a muffin tin for portion control). Lunch is a turkey and cheese sandwich on a low-carb wrap with some low-carb popcorn and almonds. Dinner is cheese pizza (on a low-carb pita) with broccoli. For a treat she’ll have a root beer float using dye-free, stevia-sweetened ginger soda and heavy cream.

Dr. Patel says that Abigail will remain on the diet for at least two years and then they’ll reevaluate. Because of the nature of her seizures — there isn’t an underlying physical cause — there’s hope that Abigail will outgrow them eventually. So far, it has been a huge success.

“Abigail is doing so well,” said Dr. Patel. “Her follow-up EEG was normal. It’s fantastic. The whole family is really happy with the success of this diet.”

If Abigail exceeds 20 grams of net carbs in a day, her mom will notice what are called “absence seizures” — extremely subtle and short seizures where she loses concentration and stares blankly for a second or two – but otherwise she’ has been seizure free since May 2018. In addition to the freedom from seizures, Elizabeth has noticed behavioral improvements as well.

“When she has too many carbs she has behavior issues,” said Elizabeth. “Shortly after starting the MAD, she started getting better reports home from school, which has led her to have better relationship with her teachers and support staff. The modified Atkins diet has helped Abigail in many ways.” 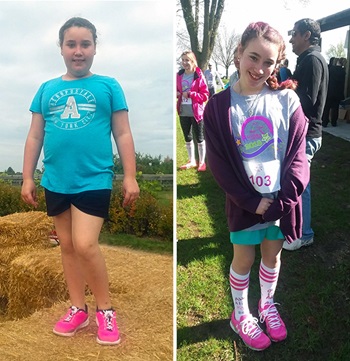 These specialized diets can be difficult to follow, especially for families with multiple kids. For the classic ketogenic diet, every piece of food for every meal has to be carefully weighed, prescribed calorie levels have to be strictly adhered to and recipes provided by a dietitian must be followed. And because the ketogenic diet is not nutritionally balanced, vitamin and mineral supplements are also required. Additionally, many health and beauty products such as some medications, toothpaste and mouthwash actually contain carbohydrates and must be avoided.

“I meet many parents who think they could never do diet therapy because they have only heard about the classic ketogenic diet and think it’s not realistic for them and their child,” said Angie. “While the modified Atkins diet is still a big lifestyle change, it is much less intimidating than classic keto.”

Elizabeth scours the internet for low-carb recipes and writes down every successful recipe in one of three spiral-bound notebooks (one for breakfasts, one for lunches and one for dinners). Finding suitable recipes has become easier in recent years with the rise in paleo, keto and other low-carb diet trends. From cauliflower pizza crusts to paleo pancake mixes, prepackaged low-carb options abound, too.

How do they work?

The origin of the classic ketogenic diet dates back to 1921, when doctors were experimenting with fasting as an epilepsy treatment — Dr. Patel points out that there are references to starvation curing seizures in the Bible. But scientists in the 1920s discovered that the same beneficial side effects of fasting could be recreated by simply restricting certain food types, specifically sugar and carbohydrates. 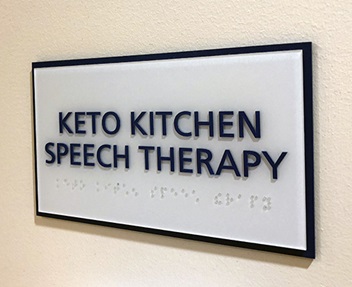 Children’s Wisconsin launched its program in the early 1990s, making it one of the first modern early adopters. There is even a dedicated kitchen in the Neurosciences Center specifically used for preparation and teaching of the ketogenic diet.

How exactly these restrictive diets works remains a mystery. With a normal, well-balanced diet, the body primarily burns carbohydrates for energy. When someone is on an extremely low-carb diet, however, the body is forced to burn fat instead. When fat is metabolized, ketones are created. Something in ketones helps prevent or ease seizure activity in some patients.

“There are probably a lot of different ways these diets have their anti-seizure effect,” said Angie. “One could be the very stable blood sugar that results from the diet. Or it could be the use of ketones as an energy source for the brain. Ketones are anti-inflammatory and they reduce excitability of neurons, meaning they calm the brain. Some brains just seem to run better on ketones. There are scientists in labs all over the world trying to figure out the exact answer.”

Still, many parents are hesitant. To them, Elizabeth said, “Don’t be afraid to try. Have an open mind and set the example for your child. I almost threw in the towel very early but I’m so glad I didn’t. It’s been life-changing.”