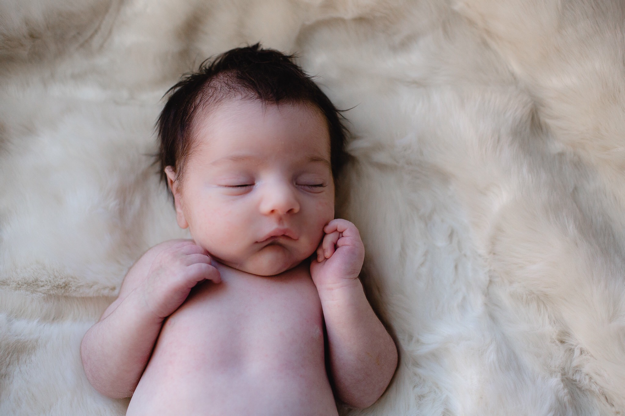 Walking at their side: How chaplains at Children’s Hospital of Wisconsin meet families’ spiritual needs

Benjamin Gino Seigel lived for just 17 days. During that time, he was surrounded by the love of his parents, Jenya Iuzzini-Seigel and Matt Seigel, legions of family and friends, and the care of doctors and nurses at Children’s Wisconsin. Also at the family’s side was Karen Lieberman, a chaplain at Children’s Wisconsin whose spiritual care made a difference as they faced the most difficult days of their lives.

Jenya had a healthy pregnancy, and was looking forward to delivering a normal baby boy when complications at birth led to an emergency C-section at a local hospital. When Benjamin was finally delivered on February 3, 2017, he needed to be resuscitated. He was transferred from a hospital in Mequon to Children’s Wisconsin, where his parents soon learned that Benjamin had suffered severe brain damage due to his time without life-giving oxygen.

When Jenya and Matt met Karen, they were reeling from the tragic events of Benjamin’s birth and prognosis. Benjamin’s health status was constantly changing, and they weren’t sure if their baby would survive. The first thing Karen did was listen.

“My vision of a chaplain had been a man with a collar and a bible, someone who gave last rites,” said Jenya. “Karen was there for us to listen, to help us ask questions, and just to be with us.” Although each of Children’s Wisconsin’s three staff chaplains come from a different faith background, it happened that Karen’s Jewish faith aligned with that of Jenya and Matt.

“I had never been super prayerful before, and when faced with the grief of what happened to Benjamin, I didn’t even have the words,” said Jenya. “Karen was able to provide authentic prayers, which felt meaningful and meditative.”

The Spiritual Care team at Children’s Wisconsin exists to provide spiritual and emotional care to all patients and families.

“Spiritual care, like physical and psychological care, is a critical component to caring for the whole child and the whole family,” said Karen. “Regardless of whether a family has particular religious needs, the spiritual need for hope, meaning and connection is universal.”

Prayer and religious counsel can be a component to spiritual care, but it doesn’t have to be. Often, spiritual care consists of simply being at a family’s side through their care journey — being there to listen and ask, “What is going for you in this experience? What are your tools for coping? How can I support you in this process?”

“We had so much love and support from our community while we were here, but Karen was one of the few people who walked with us through the whole journey — getting to know us and our sweet baby, hearing our heartbreak,” said Jenya. “She was not only a religious advisor, but also a sounding board and a kind of therapist. Her presence transcended any definition.”

A chaplain’s role can also include coordinating with other supports in a family’s life to ensure a strong web of care. Karen worked closely with the family’s rabbi, orchestrating support behind the scenes. “It was like Karen and our rabbi came up with a kind of care plan for us, handling different aspects that we couldn’t,” said Jenya. “It was a really positive force.”

The relationship between Benjamin’s parents and their chaplain grew day by day, and when Karen offered to accompany Jenya and Matt to a care meeting where Benjamin’s prognosis would be discussed, they accepted immediately. “By being present with us, Karen had gained our trust,” said Matt. “She had become an important part of Benjamin’s care.”

The news wasn’t good, and Jenya and Matt learned that their sweet baby boy was not going to survive. Karen continued to accompany them through their grief, helping them say goodbye to Benjamin and make other decisions, including that to donate his heart valves.

Jenya, who is an assistant professor of Speech Language Pathology at a local university, teaches her students, “Any time you are working with a patient, that is someone else’s child, parent or sibling and to them that person is the most important in the world. They deserve the utmost care and respect.”

That care and respect came full circle to Jenya and Matt throughout Benjamin’s care at Children’s Wisconsin. “We were never treated like a number,” said Matt. “The relationships, the care was so sincere and that meant everything to us. It was so important for us to trust everyone who worked with him. Even though Ben Gino may have suffered with all of the poking and prodding he experienced, everyone who worked with him did so lovingly. That really helped us sleep at night.”

“Even the way the doctors would manipulate Benjamin’s little limbs when they were working with him, it was so loving and seemed to relax him,” said Jenya.

That care extended beyond the day Benjamin passed away. Karen and some of the doctors and nurses came to Benjamin’s funeral and to sit Shivah with the family. Shivah is the traditional Jewish week-long mourning period in which family and friends gather at the home of the deceased. “For them to come and participate in a ritual, that for those other than Karen, wasn’t part of their faith background, was so meaningful to us,” said Jenya.

Chaplains at Children’s Wisconsin serve patients 24 hours a day, and offer whatever families need to feel whole and cared for. “We support the journey of families who may be facing some of their darkest days here,” said Karen. “It’s an incredible honor to be part of this work.”

Jenya and Matt carry on by honoring Benjamin’s life. “There is an expression in the Jewish tradition when someone passes away — we say ‘May his memory be a blessing,’” said Jenya. “We are trying to do that for our son.”

Moving through their loss, Jenya and Matt have established a fund in Benjamin’s name at their synagogue, and are also creating social action projects to bring Milwaukee parents and babies from all cultures and backgrounds together for conversation and play.

They also collected recipes of comfort food from the community into a fundraising cookbook to honor Benjamin. “As we were comforted,” said Jenya, “we want to comfort others.”