What are congenital heart abnormalities?

What is the aortic arch and what abnormalities are seen in children with PHACE syndrome?

When the heart is functioning normally, a large artery called the aorta carries oxygenated blood from the left ventricle of the heart to the body. It is shaped like a candy cane, with the first section moving up from the heart toward the head, called the ascending aorta. The aorta then curves in a C-shape in a region called the aortic arch. After the curve, the aorta becomes straight again, called the descending aorta. It moves downward toward the abdomen carrying blood to the lower part of the body. The most common defect of the aorta in PHACE syndrome is coarctation of the aorta (narrowing of the aorta) which impairs the ability of oxygenated blood to reach the body. This occurs in 19% of newborns with PHACE syndrome. Usually the narrowed region is in the aortic arch and often occurs with aneurysms (ballooning) of nearby sections. Imaging of the aortic arch may appear as beads on a string, with alternating narrowed segments and ballooned segments.

The aortic arch has three major vessels that supply the upper body and head with oxygenated blood. The three arteries that branch off are the innominate artery (also called brachiocephalic artery), the left common carotid artery and the left subclavian artery. In PHACE syndrome, these arteries are sometimes narrowed, misshapen or misplaced.

How is coarctation of the aorta diagnosed? 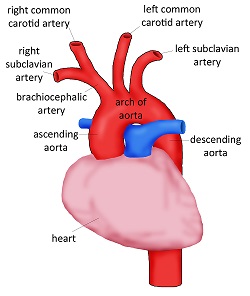 Figure 7: Normal, healthy anatomy of the aorta and its branching arteries.

Often, a heart or aortic arch abnormality will produce a heart murmur. A heart murmur is a noise caused by the turbulence of blood flowing through a narrow or malformed region. A murmur heard in the area of the aorta is often caused by coarctation of the aorta. Sometimes, coarctation can cause differences in blood pressure where the blood pressure is higher in the upper body due to increased blood flow and lower in the lower body due to decreased blood flow. This may not always be the case, especially in infants with PHACE syndrome, because of the high risk of artery malformations. If a coarctation of the aorta is suspected, the physician will order an echocardiogram or MRA of the heart and aortic arch which will show the anatomy of the aorta and evaluate for other cardiac anomalies.

How is coarctation of the aorta treated?

The aorta may be repaired surgically in an operating room or by a cardiac catheterization procedure. The surgical repair is performed under general anesthesia. The narrowed area is either surgically removed or made larger with the help of surrounding structures or a patch. The cardiac catheterization procedure may also be an option for treatment. During this procedure, the child is sedated and a small, thin, flexible tube (catheter) is inserted into a blood vessel in the groin and guided to the inside of the heart. Once the catheter is in the heart, the cardiologist will pass an inflated balloon through the narrowed section of the aorta to stretch the area open. A small device, called a stent, may also be placed in the narrowed area after the balloon dilation to keep the aorta open.

What is an aberrant subclavian artery?

An aberrant subclavian artery, also called arteria lusoria, is a common form of aortic arch anomaly in the normal population (0.5%). It is much more common in children diagnosed with PHACE syndrome, occurring in as many as 21-86%. Aberrant means that it is "out of place"; so in this case, the subclavian artery is branching off the aorta "out of place."

There are two subclavian arteries; one on the left and one on the right. Normally, the right subclavian artery arises from another artery, named the innominate artery; however, the right subclavian artery can sometimes branch off of the left aortic arch and run behind the esophagus. In most cases this is asymptomatic and does not cause problems. Occasionally, the artery puts pressure on and compresses the esophagus; this can cause problems with swallowing. If the artery is pushing on or compressing the trachea (wind pipe) it may cause persistent coughing or stridor (see Airway Compression section).

What other congenital heart abnormalities are seen in children with PHACE syndrome?

Blood returns from the body to the right atrium, the chamber on the upper right side of the heart. In the fetal heart, most of the blood flows from the right atrium to the left atrium through an opening called the foramen ovale. This opening normally closes at birth. If it fails to close, it is called a patent foramen ovale (PFO). PFOs occur in about 25% of all births and are even more common in newborns with PHACE syndrome.

A ventricular septal defect (VSD) is another congenital heart abnormality seen in PHACE syndrome. VSDs have been reported in 13% of newborns with PHACE syndrome. The ventricular septum is located between the left and right ventricles of the heart. It is responsible for separating the two chambers of the heart and conducting the electrical impulses of the heart. VSDs occur as imperfections in this separating tissue. These holes in the ventricular septum result in abnormal movement of blood from the left to the right ventricle, called shunting. The amount of left to right shunting of blood depends mostly upon the size of the defect.

Numerous other heart abnormalities are seen in PHACE syndrome but there is no clear pattern or consistent increase in infants with PHACE syndrome.

How is a ventricular septal defect diagnosed and treated?

Most ventricular septal defects can be diagnosed on physical exam, due to their characteristic murmur. The heart can sometimes be seen or felt to be beating hard because of the extra work it is performing. Babies may continuously breathe fast or hard and have a fast heart rate if they have this condition. If a ventricular septal defect is suspected, an echocardiogram can be performed.

Most ventricular septal defects are surgically repaired by patching the opening between the ventricles. A patch of synthetic material is attached to close the abnormal opening.

Useful resources for parents and families: