What is an infantile hemangioma?

An infantile hemangioma is a common type of birthmark. In the past, terms such as strawberry mark or strawberry birthmark were used for infantile hemangiomas. The word birthmark is a general term used to describe abnormalities of the skin. A baby can develop birthmarks either before being born or soon after birth. Birthmark is a broad term and should not be used as a specific diagnosis as there are many types of birthmarks.

Rarely, hemangiomas can develop in the internal organs of the body. For example, they can grow in the liver, airway, gastrointestinal tract, and sometimes in other organs. 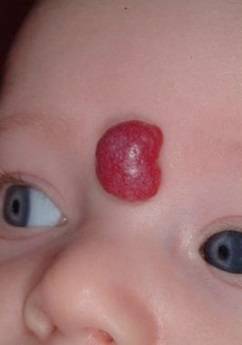 Hemangiomas can occur anywhere on the skin, but most often are found on the skin of the head or neck. They may be located in the outer layers of the skin (superficial hemangioma) or under the skin in the fat (deep hemangioma). A mixed hemangioma has both superficial and deep components to it. The color of a hemangioma varies depending on whether it is superficial, deep, or mixed. Most hemangiomas are round or oval in shape, but larger lesions may follow the shape of the affected body part. The size of hemangiomas is also variable, ranging from very small (1 mm) to very large (20 cm or larger). Every hemangioma differs in how fast it grows and how long it grows before it stops.

A superficial hemangioma is a birthmark made up of blood vessel cells that is near the outer layer of the skin. It will appear bright red to purple in color, and the surface may look uneven. Often, this benign tumor is called a 'strawberry birthmark' because of its appearance.

A deep hemangioma is a birthmark made up of blood vessel cells that is located deeper in the skin or in the fat layers. A deep hemangioma can be bluish in color, or could have a normal skin color. Often, deep hemangiomas may not be seen or felt until a baby is 4-6 months old, after it has entered the proliferative (major growth) phase and becomes protuberant (bulges out from the surrounding surface).

Mixed hemangiomas are the most common type of hemangioma. These hemangiomas have both superficial and deep components. 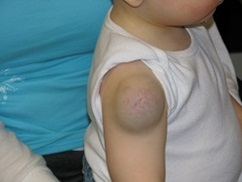 What is the most common hemangioma seen in PHACE syndrome?

How is a hemangioma diagnosed and what specialist should I see? 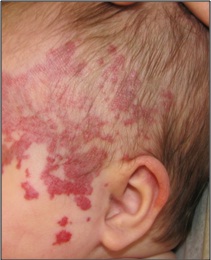 In most cases, the diagnosis of a hemangioma can be made by the child's primary doctor, but sometimes vascular anomalies specialists may be needed to ensure the accuracy of the diagnosis. Segmental hemangiomas can sometimes be mistaken for port-wine stains, a type of flat red birthmark, so the expertise of a pediatric dermatologist may be needed for more unusual cases.

What are some of the complications involved with hemangiomas?

Interference with function: As a hemangioma grows it can interfere with the normal functions of the region where it is located. This is most often observed around the eye (see Eye Abnormalities section). A hemangioma near the eye may obstruct the infant's vision, which may cause an irreversible loss of sight. As a result, it is important to closely monitor hemangiomas near the eyelids. Other hemangiomas that may need urgent treatment are those in the airway (see Airway Compression section), in the brain (see Intracranial Hemangiomas section), in the diaper area, and around the mouth or nose.

Ulceration: The skin over the hemangioma can break down. The skin may appear raw or shiny and might develop a scab. Ulcerations can be very painful for the child, which can lead to irritability and difficulty feeding or sleeping. They also increase the risk of infection and scarring. Hemangiomas that are located on the mouth, nose, ear, and diaper region carry a higher risk of ulceration. Ulcerations heal slowly and treatment might be recommended to speed up this process and to prevent infection and scarring.

Bleeding: The blood vessels that make up hemangiomas are not normal. When hemangiomas bleed, they tend to bleed rapidly, but only for a short period of time. The bleeding should stop with gentle, direct pressure for fifteen minutes. If bleeding returns or does not stop with pressure, the child's doctor should be promptly contacted.

How are hemangiomas treated?