Repair of coarctation of the aorta

Patient families can visit our coarctation of the aorta page for more information and answers to common questions.

Aortic coarctation is a congenital narrowing of the aorta, usually distal to the origin of the left subclavian artery, opposite the area of the ductus arteriosus at the aortic isthmus. Varying degrees of aortic arch hypoplasia may coexist. In the newborn, the presence of a patent ductus arteriosus will often allow adequate lower body perfusion. Presentation may vary, from acute decompensation at the time of ductal closure in the infant, to upper extremity hypertension in the older child or adult. Identification of elevated pressures in the upper versus lower extremities is useful in making the diagnosis of aortic coarctation.

Repair of aortic coarctation is usually performed via a left thoracotomy without cardiopulmonary bypass. There are a number of techniques available to repair the coarctation, each with its own advantages and disadvantages. 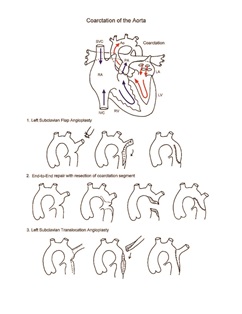 In this technique, the left subclavian artery is isolated and divided distally. The vessel is then opened longitudinally with extension of the incision on to the aorta. The subclavian artery flap is then folded down over the area of aortic narrowing and sutured into place. Subclavian patch angioplasty has a number of advantages over other techniques. This technique is relatively simple, allows for the use of the patient’s own tissue, has a low recurrence rate, and provides excellent relief of the obstruction. A relative disadvantage is that the subclavian artery is sacrificed in the subclavian flap angioplasty technique. Transient decreased perfusion to the left arm has been observed in older patients who have undergone repair using this technique, but limb threatening ischemia is rare. Associated aortic arch hypoplasia is not addressed with this technique.

With resection and end-to-end anastomosis, the aorta is isolated, and the aortic isthmus and ductal tissue are resected. The distal aortic arch is incised along its inferior side, the lower aorta is incised along its lateral side, and the two are sewn together. The advantages of end-to-end technique are that the subclavian artery is not sacrificed, and complete relief of obstruction is easily obtained. The end-to-end aortoplasty technique is the procedure of choice today, especially in patients beyond the newborn period. A variation of the classic end-to-end repair is the extended end-to-end technique. This technique is similar to the classic end-to-end repair of coarctation of the aorta discussed above, but differs in that the aortic arch is incised more proximally along its lesser curvature, and the lower aorta is incised further along its posterior-lateral aspect. The two ends are then sewn together. The advantage of this variation is that relief of aortic arch hypoplasia is possible since the aortic arch is more widely opened; therefore, obstruction is more readily relieved. Extended end-to-end repair may prove to be the operation of choice since aortic arch hypoplasia is now thought to be more prevalent than previously recognized. 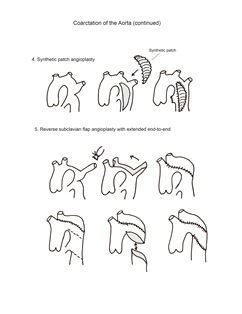 With synthetic patch angioplasty, the aorta is isolated, the site of coarctation is opened with proximal and distal extension of the incisions, and a patch of synthetic material or homograft is sutured into place. This method of repair has the advantages of being technically simple and relatively quick, offering a low rate of recurrence, and providing excellent relief of the obstruction. The use of prosthetic material has been associated with late aneurysm formation. It is thought that newer materials may decrease the potential for this complication.

Patients presenting with stenosis or hypoplasia of the transverse aorta in addition to classic coarctation represent a particularly challenging subset of patients. An innovative approach that may be applied consists of using a reverse subclavian flap technique to augment the transverse aortic arch, as well as extended end-to-end aortoplasty. While technically more demanding, the resultant improvement in results may be an attractive alternative to a cardio- pulmonary bypass strategy via median sternotomy.

The postoperative course following repair of coarctation of the aorta is usually uncomplicated. Invasive monitors commonly used include arterial and central venous catheters. Systemic hypertension is often encountered in the postoperative period, and usually responds to nitroprusside or intravenous beta blockers. Uncontrolled rebound hypertension may result in ileus or, more rarely, bowel necrosis. Later in the hospital stay, intravenous anti-hypertensive medications are switched to orally administered beta blockers and/or afterload reducing agent such as captopril or enalapril. As with patent ductus arteriosus surgery, the recurrent laryngeal branch of the vagus nerve is near the operative site, and occasional hoarseness is encountered following surgery. This is usually transient and resolves spontaneously. Paraplegia is a rare postoperative complication and is related to spinal cord ischemia during repair. Postoperative bleeding requiring reoperation is rare. Length of hospital stay required following repair of coarctation of the aorta averages 4 to 7 days.