Patient families can visit our heterotaxy syndrome for more information and answers to common questions.

One of the most captivating aspects of the study of congenital heart disease is the tremendous variety of defects we see. Consider the diagnosis of single ventricle. We all have a mental picture of this type of heart defect and its therapy. One main ventricle is assigned the role of systemic pump, and a bidirectional cavopulmonary shunt (and subsequent Fontan completion) provides pulmonary blood flow. Single ventricle, however, is a diagnosis that encompasses numerous subtypes. Hypoplastic left heart syndrome, unbalanced atrioventricular canal, double inlet left ventricle, and tricuspid atresia are just some of the varieties we see. Heterotaxy variants of single ventricle are addressed here.

The term heterotaxia or heterotaxy refers to a complex syndrome of congenital defects affecting the organs of the abdomen and chest. Other names used to describe this spectrum of disorders are cardiosplenic syndrome, Ivemark’s syndrome, and right (or left) atrial isomerism. Two main types exist, asplenia and polysplenia syndromes. While there is significant variability in the expression of these syndromes, common themes appear in each, particularly relating to failure of the usual development of right and left “handedness” of the various involved organs.

The term “asplenia” refers to the congenital absence of the spleen. Asplenia occurs at a rate of approximately one percent of congenital cardiovascular malformations. Abdominal organs are usually abnormally oriented. Cardiovascular manifestations are characteristic. Dextrocardia is present in over one-third of cases. Bilateral superior vena cavae, rather than a single right superior vena cava, occurs in nearly half of these patients. Anatomically, these patients exhibit “bilateral right-sidedness,” where the morphology of the chest structures like the atria, pulmonary arteries, and bronchi is right sided. This means that the patient has two right atria (with two sinus nodes), two right lungs, and two superior vena cavae. Total anomalous pulmonary venous connection occurs in three-quarters of cases. Malposition of the great vessels, such as transposition, occurs in most cases. Severe pulmonary stenosis or atresia is also common. A large atrial septal defect, or common atrium, is usual. Endocardial cushion defects with a common atrioventricular valve are nearly universal. The ventricular septum is usually poorly formed, and various types of single ventricle anatomy are common. Laboratory findings consistent with an absent spleen occur, including an increased number of nucleated red blood cells, target cells, and Howell- Jolly and Heinz bodies on the peripheral smear.

Although the spleen is occasionally removed in certain medical situations such as trauma or malignancy, it is an important organ of the body and functions as a kind of “filter.” The spleen filters out old cells and bacteria, particularly encapsulated organisms like streptococci and hemophilus. Absence of the spleen results in an increased risk of overwhelming infection. Lifelong prophylactic antibiotics are used to decrease the incidence of this potentially fatal complication.

Polysplenia is characterized by the presence of multiple spleens. Abnormalities of abdominal orientation occur frequently. Cardiovascular manifestations typical of patients with polysplenia are similar to those described for asplenia, with a few notable exceptions. Congenital polysplenia is usually associated with azygous continuation of the inferior vena cava. Here, the inferior vena cava (IVC) enters the azygous venous system and eventually enters the superior vena cava (SVC), rather than entering the right atrium directly as usual. Normally, the azygous system only drains venous blood from the chest wall, whereas azygous continuation of the IVC results in the majority of the systemic venous return entering the heart via the SVC. Bilateral cavopulmonary shunting in this setting results, functionally, in a near-completion Fontan (with only the hepatic blood not diverted to the lungs).

Just as asplenic patients have characteristics of bilateral right-sidedness, polysplenic patients have characteristics of bilateral left-sidedness. They have two left atria and two left lungs. Because there is no morphologic “right” atrium, these patients may have no true sinus node, and the requirement for permanent pacemaker implantation is not uncommon. Pulmonary venous return is often anomalous with right-sided pulmonary venous drainage entering the right-sided atrium and left-sided pulmonary venous drainage entering the left-sided atrium. Great arterial anomalies are much less common. Presence of intracardiac defects is similar to the asplenic patient, with atrioventricular canal occurring frequently. Lab findings show little or no abnormality of the peripheral smear. Susceptibility to infection is not increased, and prophylactic antibiotics are not routinely needed.

A case study
An interesting case illustrating typical features of the heterotaxy syndrome is described here. This patient presented in the neonatal period with the following anatomic features: abnormal abdominal situs, with a midline liver, rightward stomach bubble, and asplenia. Cardiac features include abnormal systemic venous return with bilateral superior vena cavae, moderate sized innominate vein with the left- sided superior vena cava (LSVC) entering the left atrium. This LSVC enters the left-sided atrium the way a right SVC would enter the right atrium, rather than taking the usual course of a persistent LSVC by draining into the coronary sinus. The pulmonary venous return is anomalous with a posterior pulmonary venous confluence draining into a vertical vein that connects to the left superior vena cava and drains into the left atrium. The pulmonary venous connection is obstructed at the level of its insertion into the LSVC. The intracardiac defects include an unbalanced atrioventricular canal with hypoplasia of the right ventricle. A double outlet right ventricle with side-by-side great vessels arises from the anterior aspect of the heart. The aortic arch is right-sided (see figure 1). 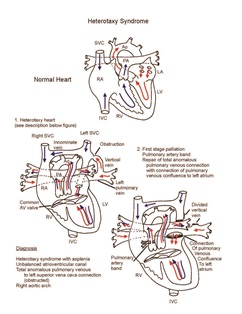 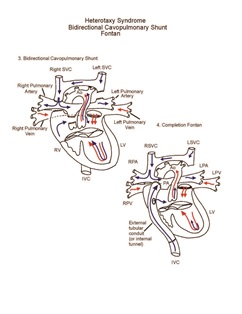 Final stage surgery was Fontan completion, with an extracardiac conduit connecting the inferior vena cava to the pulmonary artery system. The conduit was fenestrated to the common atrium with a four- millimeter communication. The fenestration allows for a “pop-off” effect, thus decompressing the Fontan conduit and increasing systemic blood supply, at the potential expense of right-to-left shunting. Recovery from this final stage was uneventful (see figure 4).

Heterotaxy variants of single ventricle present us with some of the most interesting challenges. Every case is different, and elucidating the specifics of the anatomy is important. Modern echocardiography has made this task more accurate and less invasive. Good results can be obtained with this group of patients, provided adherence to the concepts of single ventricle treatment is maintained.