Patient families can visit our VAD and ECMO page for more information and answers to common questions.

Life threatening myocardial dysfunction can occur as a consequence of primary cardiomyopathic processes, as well as following complex cardiac operations. Intrinsic to the pediatric population are some unique chal- lenges to mechanical support, including the wide range of patient size from neonate to adult. In addition, complex anatomy, such as single ventricle variants, dextrocardia, and anomalies of systemic venous return (such as left superior vena cava) must be addressed. In general, support strategies can be divided into two categories: extracorporeal membrane oxygenation (ECMO) commonly used for short-term support; and ventricular support devices used for more long-term support, including bridge to transplantation. All modes of mechanical support are associated with risks, including stroke, infection, bleeding, thromboembolism, air embolism, artificial device failure, and death. 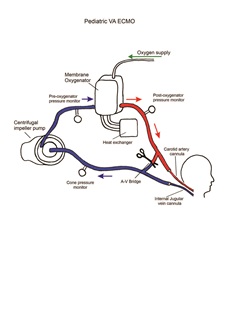 ECMO was originally developed to treat neonatal respiratory insufficiency. It was quickly applied to infants with myocardial dysfunction following cardiac surgery. Indication for ECMO includes acute life-threatening low cardiac output due to any number of causes that have failed medical therapy, including myocardial dysfunction, arrhythmias, and systemic to pulmonary artery shunt occlusion. In addition, ECMO support can be applied to patients with acute pulmonary insufficiency due to meconium aspiration, congenital diaphragmatic hernia, and other causes. ECMO supports end-organ function until pulmonary and/or myocardial function improves. Among the advantages of ECMO are its ability to conform to atypical anatomy and the presence of specialized care teams familiar with the ECMO circuit who can provide standardized care. One disadvantage of ECMO is the need for anticoagulation, which has associated risks of bleeding and thromboembolism. In addition, the duration of support using ECMO is limited. ECMO supports the heart with a mechanical pump and the lungs with an oxygenator. Mechanical support devices with no oxygenator have the advantage of being capable of longer-term support at the cost of providing no pulmonary support (see Pediatric Ventricular Assist Devices). Although there are notable exceptions, the duration of support possible with ECMO is typically about 2 weeks.

ECMO is a simplified cardiopulmonary bypass system. Venous drainage is accomplished with a cannula placed in a large vein, such as the jugular or femoral vein, or directly in the right atrium. The blood is then pumped through a membrane oxygenator with an integrated heat exchanger to permit temperature regulation. Blood returns to the patient via a cannula placed in a large artery, such as carotid or femoral, or directly into the aorta. In the patient with myocardial dysfunction in the immediate postoperative period, central cannulation is typical; venous drainage is via a cannula in the right atrium and arterial inflow via a cannula in the aorta. In other patients undergoing ECMO support, peripheral cannulation is commonly used.

For neonates and infants, this is typically accomplished using the common carotid artery and internal jugular vein. For older patients, the femoral vessels are more commonly used. Unlike conventional cardiopulmonary bypass, ECMO is a closed system, meaning there is no venous reservoir; the patient acts as the reservoir. Excessive negative venous pressures will result in low flow states due to the preload dependence of the ECMO pump. ECMO inherently increases afterload to the left (systemic) ventricle because arterial flow from the ECMO circuit results in a constant systolic pressure in the ascending aorta. The failing left ventricle must then overcome this afterload to eject into the aorta. In the face of severe myocardial impairment, the systemic ventricle can become distended, which impairs myocardial blood flow and will prevent myocardial recovery.

Systemic decompression can be accomplished by inserting a cannula via direct cannulation or transatrially via peripheral cannulation. This cannula is then connected to the venous limb of the ECMO circuit.

ECMO has more recently been applied in a rescue modality, where cannulation is accomplished while the patient is being resuscitated. A smaller simplified circuit that has low priming volume is used. It is fully assembled and ready to prime or is pre-primed with crystalloid solution. This modality is used to allow for transition from CPR resuscitation to ECMO as quickly as possible. A traditional ECMO setup requires 30 to 45 minutes to assemble, while the simplified circuit is ready for immediate use. 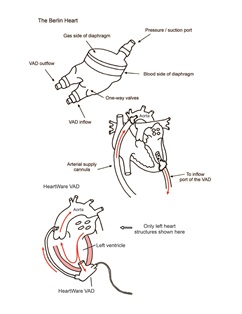 A ventricular assist device (VAD) is a blood pump that can augment or replace the function of a fail- ing ventricle. Unlike ECMO, the lungs provide gas exchange, and an oxygenator is not necessary. In the adult population, VADs have been used for many years and provide circulatory support with improvement in end-organ function. VADs are used as a bridge to transplant, a bridge to recovery or in select circumstances in adults, as destination therapy. The pumps come in two general varieties: displacement pumps that produce pulsatile flow and continuous pumps that provide continuous flow.

Pediatric ventricular assist technology has been slower to develop due to the complexities of miniaturizing these devices. The main advantage to the use of VADs is the potential for longer-term use. This permits recovery of previously impaired organ function, reduces left atrial filling pressure, and reduces pulmonary vascular resistance. The result is a better cardiac transplant candidate and a less complicated post-transplant course. In addition, significant economic advantages exist with the use of a VAD since the devices are less personnel intensive and an ICU stay is not necessarily required. However, thromboembolic complications of pediatric assist devices are significant and exceed those of similar adult devices from which they modeled.

As a consequence of the high complication rate and potential for long-term survival with transplantation, pediatric assist devices are generally not suitable as destination therapy.

The Berlin Heart EXCOR is a displacement pump that comes in a variety of sizes, making it suitable for use in patients of all sizes, including infants. This device uses an inflow cannula that leads to a valved pumping device outside the body and a return cannula. The pump mechanism is driven by an external compressor and suction source. Blood enters the pumping unit through a one-way valve. Inside the pumping unit there is a blood chamber separated from the pressure/suction chamber by a flexible diaphragm. As blood enters the VAD, the diaphragm relaxes (diastole) as suction is applied to the pressure/ suction chamber. When the blood chamber is full, compressed air enters the pressure/suction chamber and pushes (displaces) the diaphragm, which ejects blood through another one-way valve to create a “systole.” Flow is pulsatile, thus mimicking normal blood flow.

Other devices used in the pediatric setting are available. Each has its unique advantages and disadvantages. The HeartWare device by Medtronic is a centrifugal, continuous flow pump. It is a small pump suitable for some children. The device has an impeller suspended by magnets to minimize wear points. The HeartWare pump is implanted entirely within the chest. Its inflow port is placed directly through the ventricular wall, and an outflow tube is connected to the aorta. A cable brought out through the skin connects to a small control unit. This device permits most normal activities and can be used at home.

Other forms of mechanical support for children are being developed. Novel applications of a total artificial heart arrangement being used involve removal of the cardiac ventricular mass and atrioventricular valve leaflets. Next, two valved conduits are sewn to the mitral and tricuspid annuli. These conduits act as atrioventricular valves. They are then connected to external displacement pumps or centrifugal pumps. These pumps are then connected to the aorta and pulmonary artery with conduits, as used for the Berlin heart. This novel arrangement has been used to bridge some smaller patients to transplant. The complexity of this approach and its many intersect- ing variables make its selection reserved for patients in whom other strategies are not possible.

The field of ventricular assist and mechanical support is constantly changing as novel new devices and techniques are developed. No current device is without its risks. With careful attention to all aspects of device management and selection, good outcomes are achievable.