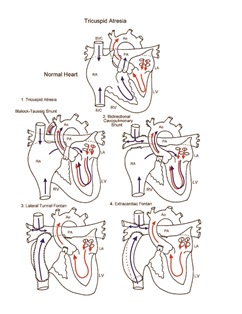 Tricuspid atresia is a form of single ventricle characterized by complete failure of development of the tricuspid valve. Incomplete development of the right ventricle and/or pulmonary artery is frequently associated. Systemic venous return to the right atrium must cross the atrial septum through an atrial septal defect and enter the left atrium to mix with pulmonary venous return. Obligatory mixture of systemic and pulmonary venous return results in systemic arterial oxygen desaturation. Prolonged systemic arterial desaturation can lead to progressive elevation of hematocrit and hyperviscosity. Late complications can result. Early diagnosis and management of single ventricle and its variants are essential.

Cardiopulmonary bypass is required for the Fontan completion procedure and is usually used for the cardiopulmonary shunt procedure as well. Use of aortic cross-clamping is variable and depends on the individual anatomy and surgeon preference.

The postoperative course following the bidirectional Glenn shunt procedure is usually uncomplicated. The postoperative course following completion Fontan can be more complex. Invasive monitors used include arterial and central venous catheters. Atrial lines are used when needed for access and/ or hemodynamic management. Measurement of preload to the ventricle allows for titration of volume replacement and adjustment of vasoactive infusions. Non-invasive monitors include NIRS (near infrared spectroscopy) probes to assess adequacy of regional and global perfusion and traditional pulse oximetry. Vasoactive agents might include epinephrine and/ or milrinone. Numerous other agents are available and are tailored to the specific needs of the patient, targeting adequate oxygen delivery to the tissues of the body and optimization of cardiac output.