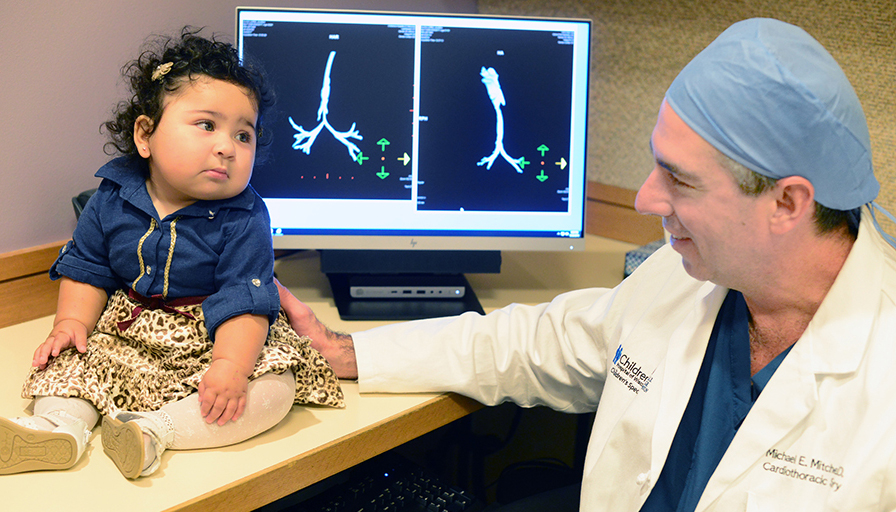 Today, Julissa Ulloa-Lopez is a healthy 1-year-old who likes to be heard as much as she likes to be held. “You could say she is a momma’s girl,” said her mother, Ruth Lopez Deleon, through an interpreter. “She wants to be with me all the time, and she is always touching my face to make sure I’m really there.”

Julissa’s extra-close connection with her mother just might be the result of the difficult path they’ve walked together toward Julissa’s health. 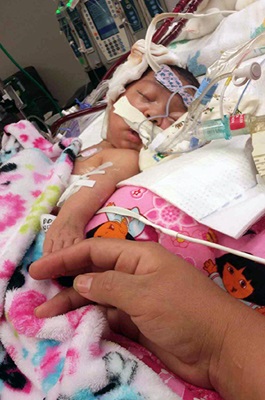 While Ruth was pregnant, her doctor in Iowa discovered that Julissa wasn’t growing as she should — and even stopped growing altogether during the final month of pregnancy. Ruth’s doctor scheduled a delivery for September 25, 2017. “My doctor said it would be better if the baby grew outside my body,” Ruth said.

When Julissa was born, she was initially thought to have tracheomalacia, a softening of the cartilage of the trachea (windpipe) that typically causes a barking cough and wheezing. Doctors believed that she would outgrow the condition. Julissa remained in the hospital for a few weeks, as she was having difficulty eating. But on October 13, she was discharged home.

After a month at home, Julissa became short of breath while feeding. “It was like a fish with no air,” Ruth said.

Sensing that something was terribly wrong, Ruth immediately took her daughter to the emergency room at her local hospital, where Julissa was given oxygen. “But the oxygen wasn’t getting into her lungs correctly. So they increased the oxygen, and it was like the oxygen burst inside of her.”

Julissa was in full respiratory arrest, requiring intubation (placement of a plastic tube into the trachea to maintain an open airway). When intubation failed, Julissa was placed on extracorporeal membrane oxygenation (ECMO), a pumping device that provides cardiac and respiratory support.

A CT scan showed something the doctors had never seen before: Julissa had two tracheas, one in front of the other.

“I wanted to die, especially when the doctors were trying to resuscitate her,” Ruth said. “She was so small and so fragile, and since I don’t speak English, I didn’t understand what they were saying. It was so difficult to hear that she didn’t have hope or life expectancy.”

Hope on the horizon

That’s when Ruth and Julissa’s path took a positive turn. The Iowa hospital sent the images from the CT scan to Children’s Wisconsin, and Michael E. Mitchell, MD, cardiothoracic surgeon, felt confident that he could help.

“We started the tracheal reconstruction program in 2007 after having a series of complicated cases referred to us,” Dr. Mitchell said. Since the hospital already had one of the country’s top pediatric heart programs in its Herma Heart Institute — and given that 40 percent of patients with a tracheal disorder also have a congenital heart disorder — Dr. Mitchell built the program around a team approach, including specialists in cardiac care, general surgery, cardiothoracic, otolaryngology, pulmonary, anesthesiology and critical care.

“We thought Julissa was a case for trachea reconstruction and transported her on an ECMO flight,” Dr. Mitchell said. 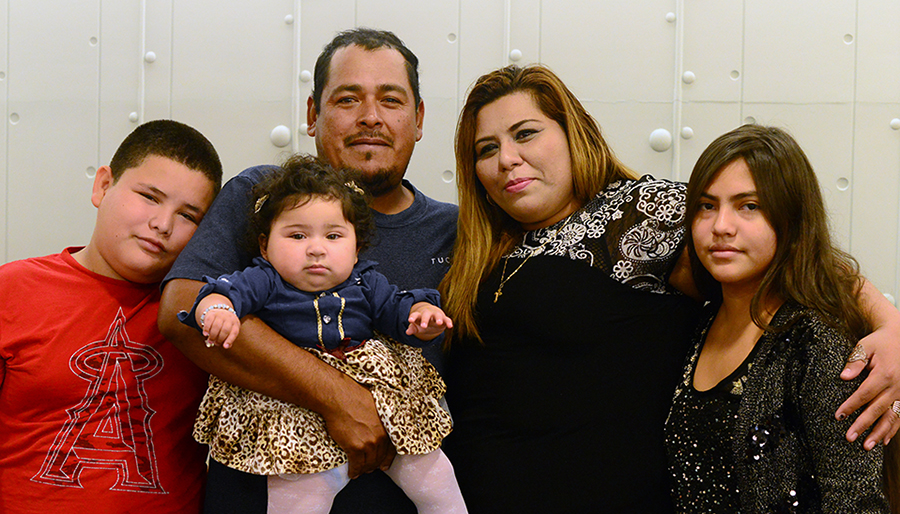 Until recently, only children born within a three- to four-hour radius of Children’s Wisconsin could be transported there if they required ECMO. But in 2017, the hospital partnered with Innovative ECMO Solutions, the nation’s only non-facility, non-military based ECLS transport team, to provide fixed-wing ECMO transport. Today, Children’s Wisconsin can accept patients from anywhere in the country.

In the middle of November, while Julissa flew to Milwaukee with a team of doctors and nurses from Children’s Wisconsin, Ruth made the seven-hour drive from Iowa. “Those were the most terrible hours of my life. I didn’t know if they were having to resuscitate her,” she said. “Then I got a call from the hospital that she had arrived and was doing okay in her room. That’s when I knew that this was an excellent group of doctors and nurses.”

When Ruth arrived, Dr. Mitchell met with her to show her images of Julissa’s trachea and discuss the surgery. “When I met with Dr. Mitchell, he told me through an interpreter, ‘I have operated on tracheas, but not like this condition. But I can do it. I have hope. I have good expectations,’” she said. “I was scared because I didn’t know what the outcome would be, but I trusted him.”

During a five-hour operation, Dr. Mitchell and his team reconstructed Julissa’s trachea using her own tissue. Julissa was taken off ECMO in the operating room, and the surgery was an immediate success.

“After the surgery, Dr. Mitchell said Julissa tolerated everything, and everything looked beautiful,” Ruth said. “I was very happy that Dr. Mitchell could do what no doctor could do in this state. He returned my daughter to life. I am very grateful to God and to the doctor.”

A bright future ahead 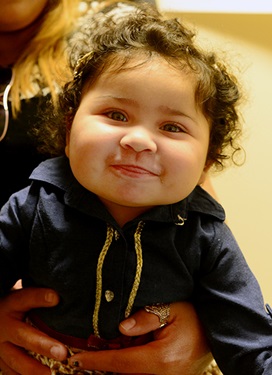 Julissa was discharged from Children’s Wisconsin on January 25, 2018, a month and a half after her surgery.

Today, her mother says she is doing well — eating and breathing just as she should. In early March, Julissa was back in Milwaukee for follow-up appointments with Dr. Mitchell and with an ear, nose and throat specialist at Children’s Wisconsin.

“Dr. Mitchell said Julissa was beautiful. I didn’t even have to wait for the interpreter to understand that,” Ruth said. “He told me that we are always welcome at Children’s Wisconsin, and he congratulated me. I told him, ‘No, I want to congratulate you.’”

Unless her condition changes, Julissa won’t require additional follow-ups for another six months. When that time comes, Ruth intends to make the seven-hour trip to Children’s Wisconsin because of the trust she has in Dr. Mitchell and his team.

Michelle Jackson Writer Children’s Wisconsin
The Herma Heart Institute at Children’s Wisconsin is one of the nation’s top pediatric heart programs and the largest in the state. We care for patients with congenital heart disease from before birth through adulthood, and we consistently report some of the best surgical outcomes for even the most complex types of heart disease.