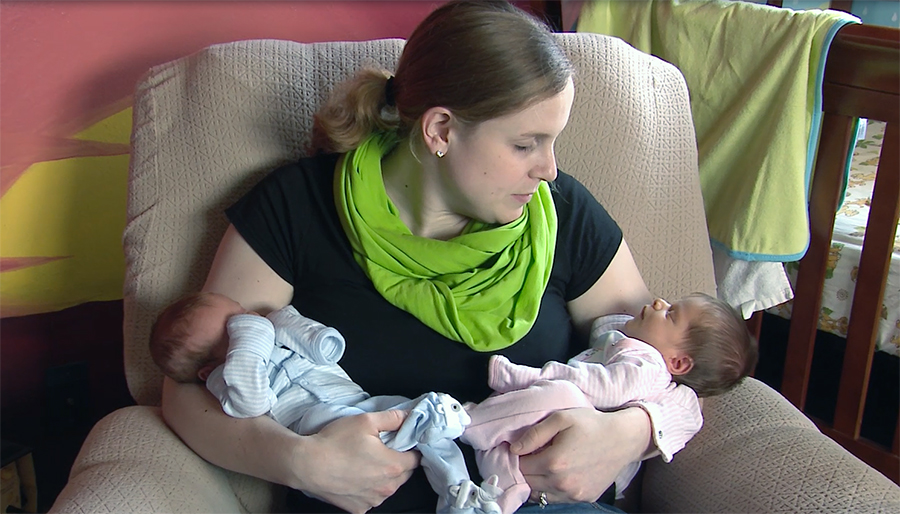 From the brink of death to motherhood: First person to ever survive rabies reflects on becoming a mom

Jeanna Giese-Frassetto, the first person to survive rabies without being vaccinated, became a mom when she gave birth to twins Carly Ann and Connor Primo on March 26, 2016.

In 2004, Jeanna was bitten by a bat she rescued from her church in Fond du Lac, Wisconsin, but did not seek medical attention. Three weeks later she was rushed to Children’s Wisconsin where doctors confirmed she had rabies. The doctors began an experimental treatment that included a cocktail of drugs that placed her in a coma to protect her brain and give her immune system time to fight the infection. She was released from the hospital virus-free after 75 days.

Through her determination, her family’s faith and the support of friends, Jeanna relearned how to walk, talk and read, and was able to graduate with her high school classmates. Since then, she graduated from college, has gotten married and is now a proud mother.

The treatment used to save her life, called the Milwaukee Protocol, has been used to save 10 other lives: two in the United States, four in Peru, and one each in Colombia, Brazil, Chile and Qatar.

Not included in those figures are the lives it made possible — Carly and Connor. Days before celebrating her first Mother’s Day as a mom, Jeanna and her mom, Ann, reflected on what this latest milestone means for their family.

“It will be great knowing that I’m actually a mother on Mother’s Day… knowing that I finally got to this point in my life.” Jeanna Giese-Frassetto

The Milwaukee Journal Sentinel chronicled Jeanna’s recovery from rabies in the 2005 “Soul Survivor” series, which was a finalist for the Pulitzer Prize for Explanatory Reporting.

Children's Wisconsin
The Pediatric Infectious Disease Program at Children’s Wisconsin is committed to comprehensive and specialized medical care for children and youth with chronic and acute infectious disease. We are also an international leader in the care of children with rabies and provide a comprehensive program for children, youth, women, and pregnant women living with HIV.