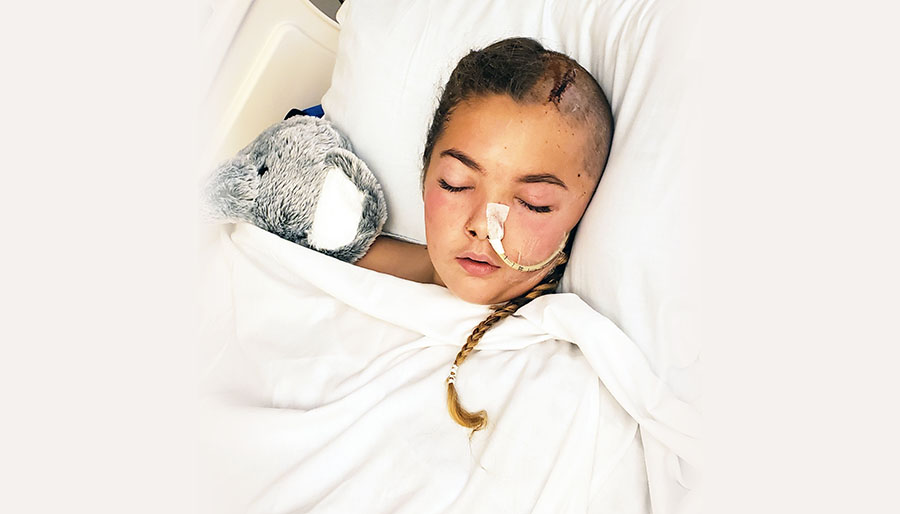 When a young girl lost the ability to talk, doctors made a shocking discovery

The small voice pierces through the darkness and pulls Reannyn Bickle from her deep, silent sleep.

It’s 3:30 a.m. The night after Thanksgiving 2019. Reannyn is lying on the blue fold-out bed in the hospital room of her 11-year-old daughter, Raynah, on the seventh floor of Children’s Wisconsin. The room is dark except for the soft glow of the machines keeping track of Raynah’s blood pressure, heart rate, oxygen levels and brain activity. The steady, rhythmic beeping a reassuring reminder that everything is, for the time being, stable.

Reannyn rolls over and peers through the darkness at her daughter.

Reannyn jolts up and climbs into Raynah’s hospital bed. Snuggled in tightly, she chokes back tears of joy and relief as she listens to the first words her daughter has spoken in nearly a month. 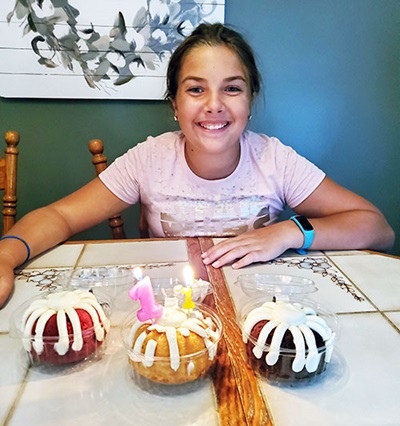 About four weeks earlier, Raynah had been battling a mild headache and a fever for several days. It was being controlled with ibuprofen, but it was persistent. On October 27, a strep test at a local urgent care came back positive so Reannyn and her husband, Ethan, thought that’s all there was to it. Raynah stayed home from school and started a 10-day course of antibiotics.

But on the morning of October 29, everything changed. Raynah woke up on her own, came downstairs and laid on the couch. She ate some crackers, took her antibiotics and then went up to take a shower.

A short while later, Reannyn heard an odd sound from upstairs and their dog, Cami, began barking. When she went upstairs to make sure everything was okay, she found Raynah sitting on the edge of her bed, hair still wet, staring blankly and motionless. Reannyn called her name, tapped her, shook her — there was no response.

As an ICU nurse, Reannyn knew the signs of a stroke well and feared the worst. She immediately grabbed Raynah and escorted her out to their car and raced to a nearby emergency room. Knowing that every second was crucial, Reannyn called ahead to make sure they were ready and waiting for her.

In the emergency room, doctors ran a battery of tests that all came back normal. While all this was going on, Raynah continued to be unresponsive, to questions or even pain.

“That’s when we really started to panic,” said Reannyn. “They were poking her and she wasn’t even flinching. She couldn’t move.”

The emergency doctor alerted the Children’s Wisconsin Transport Team to get an ambulance ready. While they waited, they performed a CT scan. The image revealed a collection of fluid on Raynah’s brain. This sac of fluid was so large and creating so much pressure against the left side of her brain that it was pushing it more than a quarter inch out of alignment.

At first they thought it was build-up of blood, possibly caused by a fall or some sort of trauma. Reannyn and Ethan frantically thought back to the preceding days and weeks, but couldn’t think of any such incident. Then the emergency doctor came back into the room and revealed the answer — it wasn’t blood, it was pus. 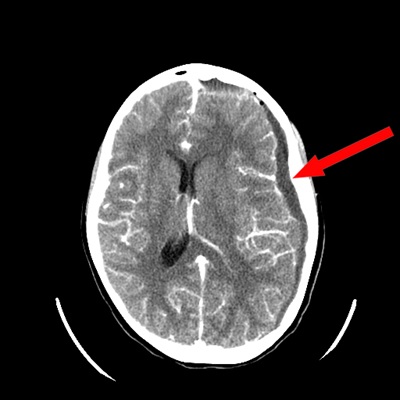 Raynah had a large collection of infected fluid on her brain, known as a subdural empyema. The CT scan showed that her sinuses, too, were completely packed with infection. A brain infection of that nature on an otherwise healthy kid is extremely rare. In fact, fewer than 20,000 cases occur annually in the United States. Children’s Wisconsin treats less than five cases every year.

“Rare but regularly catastrophic,” is how Rodney Willoughby, MD, an infectious disease specialist, described them.

It’s precisely because of that rarity that it went undetected for so long.

“She was completely asymptomatic,” said Ethan. “She just had her 11-year-old checkup and everything was good. They didn’t see anything alarming.”

“Mom and Dad were doing everything right. They knew she wasn’t quite right and they were taking her to her pediatrician, they were taking her to urgent care trying to figure out what was going on with Raynah,” said Irene Kim, MD, a pediatric neurosurgeon in the Children’s Wisconsin Neurosciences Center. “But pus on the brain is not a common thing to look for.”

But because it had been silently growing and spreading for so long, it had reached a critical point. Less than two hours after arriving at Children’s Wisconsin, Raynah was headed to the operating room for emergency brain surgery. They needed to get the infection cleaned out as soon as possible.

Reannyn remembers Dr. Kim coming in and talking with them. “She told us, ‘This is very serious, she may need multiple surgeries, you’re going to be here for a while, you need to be prepared.’

“She did not sugarcoat how serious this was and we were very grateful for that,” said Reannyn. “She was very direct, but so nice about it.”

In a two-and-a-half-hour procedure, Dr. Kim removed a large section of the left side of Raynah’s skull to wash out the pus with a saline solution and relieve the pressure on her brain. Two days later, Sophie Shay, MD, a pediatric specialist with our Ear, Nose and Throat Program, went in to clean out Raynah’s sinuses.

In total over 11 days, Raynah underwent three washouts of her brain and two of her sinuses. But she was not yet out of the woods. 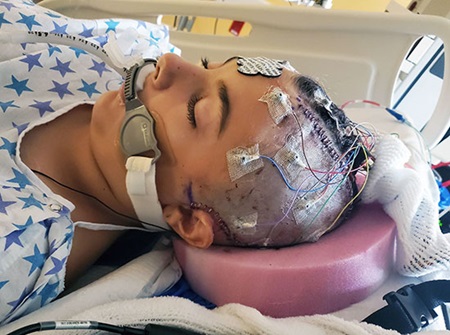 In the following couple of weeks, Raynah continued to have high fevers, often upwards of 105 degrees that required cooling machines to control. She also remained paralyzed and unable to talk. And she started to have seizures.

“She had been on antibiotics and they were testing her brain fluid twice a day,” said Reannyn. “The tests had been negative so they were kind of baffled.”

The first step Dr. Willoughby recommended was hyperbaric treatment, a pressurized room where the patient inhales pure oxygen. With the air pressure increased to three times greater than normal — roughly the equivalent of being 90 feet under water — the lungs are able to inhale more of this purified oxygen and carry it throughout the body. Those high levels of pure oxygen can more effectively fight bacteria, neutralize the toxic gas and also stimulate the growth of healing stem cells.

“If a ventilator can provide 100 percent oxygen, a hyperbaric chamber can deliver something like 2,000 percent is how it was explained to us,” said Reannyn.

“Hyperbaric treatment treats infections with oxygen in extreme concentration. It’s like an espresso coffee version of oxygen,” said Dr. Willoughby. “But it’s also the pressure. Think of a SCUBA diver. If you go down 90 feet, you now have three atmospheres of pressure, all this water weight, surrounding you. So when you try and pull in a breath you have all this pressure forcing more concentrated oxygen into your lungs and throughout your body.” 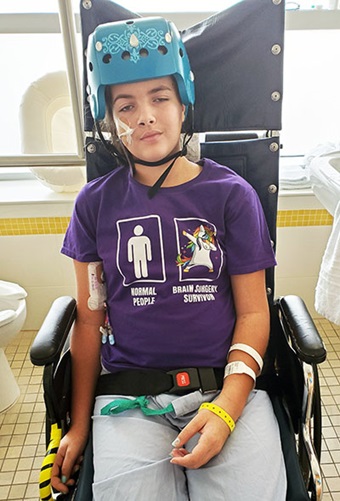 These 90-minute treatments took place every day for about three weeks — a long and arduous 6-hour process that included travelling to Aurora St. Luke’s Medical Center, the only full-room hyperbaric treatment site in the area.

The next step Dr. Willoughby recommended was infusions of vitamin B12, believed to be effective against the toxin. Raynah received her first injection four days after starting hyperbaric treatment and then a second about a week later.

“You have bacteria in the pus putting out toxic gas that’s killing off cells,” said Dr. Willoughby. “The B12 is able to absorb those toxins like fly paper to prevent further cell death.”

Every day with every treatment, Raynah made progress. At first, when they’d pinch her right side, there would be no reaction whatsoever. Then one day, she winced. A couple days later, she pulled away. Then she was able to move her shoulder, lift her elbow, then her foot. Slowly but steadily, Raynah started to return.

And then, the night after Thanksgiving, she spoke again.

“More and more words kept coming. By the end of the Thanksgiving weekend, she was talking, conversing, making her needs known,” said Reannyn. “There were so many happy tears.” 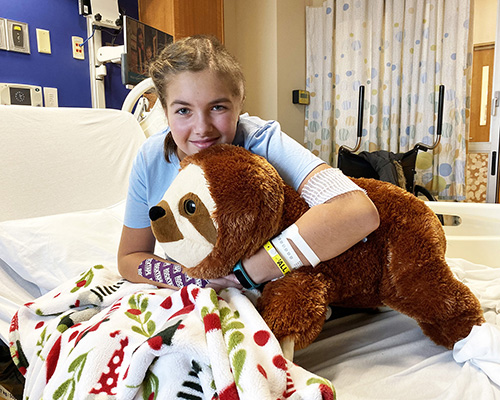 On the afternoon of December 13, Raynah went home. She had spent 46 days at Children’s Wisconsin. While she’ll still need regular physical, occupational and speech therapy sessions, doctors expect her to make a full and complete recovery.

“She showed striking progress,” said Dr. Willoughby. “At first, we were anticipating she would have to go to a long-term care facility for rehab but she recovered so fast that we ended up sending her home.”

In late December, Raynah completed her final round of antibiotics and was back for a follow-up appointment with Dr. Kim in early January. There were no signs of infection. Raynah will come back again in February, and if everything continues to look good, Dr. Kim will schedule her for one final surgery to replace the piece of bone she removed in October.

“Raynah was cared for by so many different doctors and nurses, but the consistency of that care was amazing,” said Reannyn. “The way they talked about her like she was their only kid. All the doctors, nurses, residents and attendings were so excited and happy to see her progress. It takes very special people to take care of children.”

Thanks to those very special people and their coordination of care, Raynah’s journey at Children’s Wisconsin will be but a single blip on a long, full life.

“When she came in, it looked like she was going to end up paralyzed on one side of her body and it was an open question whether she would ever be able to speak again. She was going to end up with a very different life,” said Dr. Willoughby. “I think this is about as close to miraculous as you can get.”