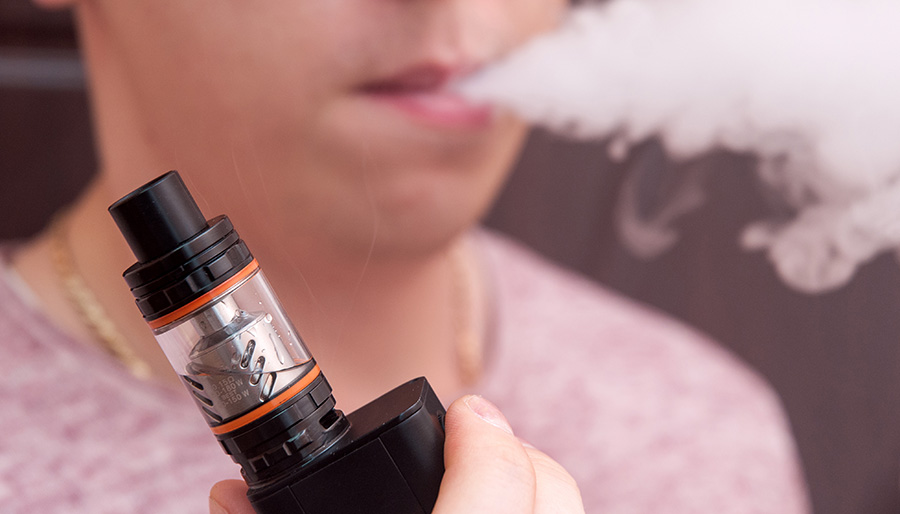 Teens are using e-cigarettes (vaping) in record numbers: from 2011 to 2015, there was a 900 percent increase in e-cigarette use among high school students. The latest Youth Risk Behavior Survey by the Centers for Disease Control and Prevention shows more than 60 percent of students will try vaping by 12th grade and 35 percent of 12th graders have vaped in the past month. As a pediatrician and a mother of teens, I am concerned about the short and long-term effects of vaping on kids.

Many teens mistakenly believe that vaping is harmless. Ads claim that e-cigarettes only give off water vapor. But the truth is, there are many harmful and addictive ingredients in e-cigarettes. Add the fact that there is little research on the effects of e-cigarettes, and we have a generation of teens who are guinea pigs for the vaping industry.

There are many types of e-cigarette or vaping devices. These devices work by heating liquids that are inhaled as an aerosol containing nicotine or other substances.

Devices include vape-pens, hookahs, box mods and JUULS. JUULs entered the market in 2015 and are the most popular e-cigarette. 20 million JUULs are sold per month, making up 45 percent of the e-cigarette market.

The JUUL, a slim cartridge that looks like a USB drive (and charges in a USB port), is targeted to the youth market. They are easy to buy online and the pods of e-liquid or “juice” come in flavors that appeal to kids, including fruit, candy and bubble gum. Each JUUL cartridge contains 50 mg of nicotine — equivalent to smoking an entire pack of cigarettes.

YouTube videos and other social media sites feature videos that teach kids how to use the JUUL and other e-cigarette devices, as well as how to refill the cartridges with illicit substances like marijuana.

What is in e-liquids?

E-liquids that are heated to create aerosol contain glycerol, propylene glycol (found in antifreeze products), nicotine and flavoring. They are not comprised of water and natural ingredients as many teens believe. E-liquids are not FDA regulated — so there are no standards a manufacturer has to follow.

Nicotine is a drug that’s highly addictive, which is why vapers and smokers continue to use even after they get sick and have negative side effects. A 2014 study found the amount of nicotine in e-liquid refills is often quite different from the amount listed on the package.

What are the health effects?

The flavoring chemical found in many e-liquids has been linked to lung disease and damage, with the aerosols entering the user’s lungs and leaving chemical residue behind. A Harvard University study found that more than 75 percent of flavored e-cigarettes and e-liquid contained chemicals linked to severe respiratory disease.

We also know, from research on other chemicals found in e-cigarettes, that these products are harmful to users and those around them. What’s more, a recent study by the American Academy of Pediatrics showed that e-cigarette use by high school students was a significant predictor that they would go on to smoke traditional cigarettes.

The most powerful ingredient in e-cigarettes is nicotine. Nicotine has a negative impact on adolescent brain development, which can cause problems with learning and memory, as well as long-term behavioral impairments including depression, anxiety and mood disorders.

Other negative health effects include:

Talk to your teen

E-cigarettes are new and constantly changing. That means the long-term consequences of these products just can’t be predicted.

Groups like the American Academy of Pediatrics, American Heart Association and American Lung Association have urged the FDA to take immediate action and remove the JUUL e-cigarettes from the market, including the internet. This hasn’t happened, so it’s essential that parents help kids understand the dangers of vaping.

Talk to your teen about vaping, and ask them what they’ve seen and experienced with their peer groups. Helping teens understand how e-cigarettes are being marketed to their age group can help, too.

If you have questions about your teen’s health or e-cigarette use, talk to your pediatrician.