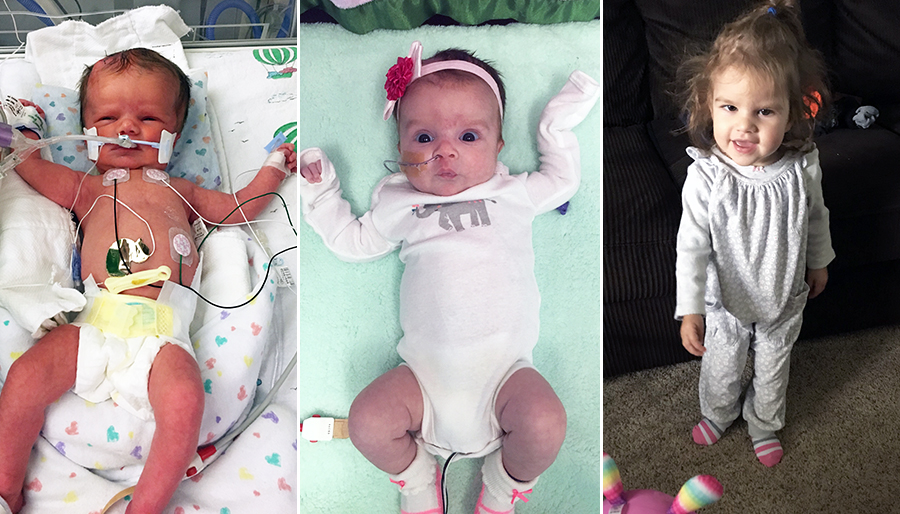 Amy McLain’s pregnancy was sailing along smoothly when she experienced every expectant mom’s biggest fear. Her 30-week ultrasound showed a problem — her baby’s brain was bleeding.

Amy was immediately rushed to Children’s Wisconsin where she was cared for at our Fetal Concerns Center and her baby was diagnosed with hydrocephalous, a condition where spinal fluid builds ups in the brain, creating harmful pressure. For a fetus whose brain is still developing, hydrocephalus can have serious consequences, including motor problems and learning disabilities. Little Eleanor was born six weeks premature on Dec. 9, 2016, weighing just 5 lbs. 11 oz. Of that, nearly 2 lbs. consisted of the fluid in her head.

At 1 day old, Eleanor had her first brain surgery to attempt to relieve some of the pressure on her brain. A shunt was inserted to drain the fluid. “They tapped it nearly every day,” said Amy. “It was really hard.”

The family remained in the Neonatal Intensive Care Unit, where Eleanor was surviving, but not thriving. “She wasn’t waking on her own or wanting to eat on her own,” said Amy.

Eleanor’s care team included doctors from the Neurocritical Neonatology team, who provide coordinated care for babies born with or at risk of neurological disease or brain injury. Her doctors were working to understand what was happening with Eleanor’s brain and nervous system, knowing that the earlier they could intervene, the better Eleanor’s chances of healing. Because newborn’s brains are different from adult and even children’s brains, having a team that monitors a baby’s neurodevelopmental progress is key for helping fragile babies survive and thrive.

“It was a rough, rough road those first days and weeks,” said Amy. “Thank goodness we had an amazing staff to support us, including our nurse Angie, who became Eleanor’s primary nurse and was with us every step of the way.” 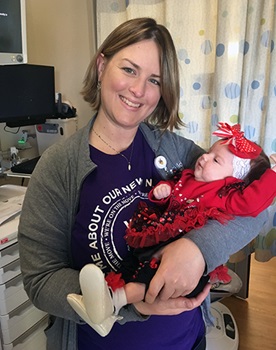 At 1 month old, Eleanor took a turn for the worse and began having seizures. Her surgeons attempted an ETV, a minimally invasive procedure that attempts to create a bypass for cerebrospinal fluid built up around the brain. Unfortunately, the surgery didn’t have the intended effect. Then, an EEG scan revealed that there was no measurable activity at all in Eleanor’s brain.

“That was a devastating moment,” said Amy. “We began talking with the palliative care team about how we could take Eleanor home, get her hospice care and keep her comfortable. But as the days went on, we realized we couldn’t accept that.”

So Eleanor’s team decided to try a third surgery to insert a shunt in the area of her skull still under pressure. But there was a big risk — Eleanor’s skull could collapse.

In the minutes and hours after the surgery, as Eleanor’s parents hoped against hope for the best, each moment of uncertainty was excruciating. “And then, it was like a light went on,” said Amy. “Suddenly Eleanor woke up and let us know she was hungry. She wanted to communicate with us.”

This moment, of all ups and downs the family had been through, was the most overwhelming. “My heart just melted,” she said.

After spending her first 55 days of life in the hospital — including Christmas and New Year’s — Eleanor went home to join her siblings, ages 5 and 8, in Green Bay. Since then, she has made remarkable progress.

“Now she’s almost 2, and she is sitting up by herself and working on standing. She has lots of words and she’s such a happy girl,” said Amy.

Eleanor visits specialists at Children’s Wisconsin at least monthly, including her neurologist, the developmental clinic, audiology and ophthalmology.

“Everyone was excellent and so caring from the very beginning,” Amy said. “We’re so grateful that Eleanor will be celebrating her second Christmas this year. It would not have happened without her team at Children’s Wisconsin.”

When Amy took Eleanor back to her neonatologist, Dr. Cohen said “I believe in miracles, and Eleanor is one.”

Katie Lott Writer Children's Wisconsin
Children's Wisconsin is one of the region's top destinations for the care of newborns and fetuses with complex medical and surgical needs, before or after birth. The Fetal Concerns Center offers comprehensive care coordination for families and work in partnership with the providers who offer a variety of fetal interventions. We have Wisconsin's largest level IV NICU and care for the region's high-risk newborns. Our comprehensive program is nationally recognized for our interdisciplinary approach, physician expertise and consistently high measures in safety, quality and outcomes.