Living with a pediatric pacemaker

With advances in technology, artificial pacemakers today generally last eight to 10 years (depending upon the type of heart condition) and, in most cases, allow a child to lead a normal life. In addition, advances in pacemaker circuitry have reduced the interference risk from certain machinery, such as microwaves, which in the past may have altered or otherwise affected the pacemaker. Even so, certain precautions must be taken into consideration when a child has an artificial pacemaker.

What is a pacemaker?

Children's pacemakers may be placed under the skin in one of several locations. Young children (infants, toddler, preschool, and young school-aged children) often have the pacemaker generator placed in the abdomen, since the fatty tissue found there can help protect the generator from normal everyday childhood activities such as playing. As a child gets older (nearing adolescence), the generator is often placed in the shoulder area, just under the collarbone.

What is an implantable cardioverter defibrillator (ICD)?

An implantable cardioverter defibrillator (ICD) is a small device, similar to a pacemaker, that is implanted under the skin, often in the shoulder area, just under the collarbone. An ICD senses the rate of the heartbeat. When the heart rate exceeds a rate programmed into the device, the ICD delivers a small, electrical shock to the heart to slow the heart rate. Many newer ICDs can also function as a pacemaker by delivering an electrical signal to regulate a heart rate that is too slow.

What is the reason for getting a pacemaker or an ICD?

When the heart's natural pacemaker has a dysfunction, the signals it sends out may become erratic: either too slow, too fast, or too irregular to stimulate adequate contractions of the heart chambers. When the heartbeat becomes erratic, it is referred to as an arrhythmia (an abnormal rhythm of the heart, which can cause the heart to pump less effectively).

Arrhythmias can cause problems with contractions of the heart chambers by:

The heart is, in the simplest terms, a pump made up of muscle tissue. Like all pumps, the heart requires a source of energy in order to function. The heart's pumping energy comes from a built-in, electrical, conduction system. 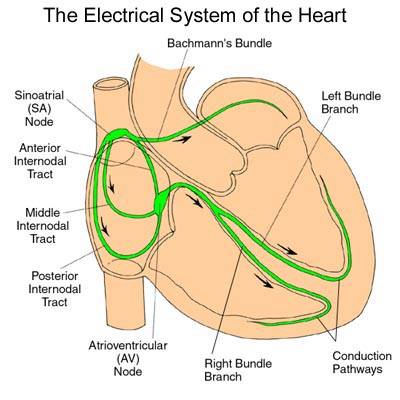 What is the pulse?

The pulse rate is a measurement of the heart rate, or the number of times the heart beats per minute. As the heart pushes blood through the arteries, the arteries expand and contract with the flow of the blood, and this can be felt in various points in the body as a pulse. Taking a pulse not only measures the heart rate, but also can indicate the following:

Many pediatric pacemakers provide varying rates, depending on your child's activity level and other factors. The pulse rate may fluctuate and increase with exercise, illness, injury, and emotions. Girls ages 12 and older and women, in general, tend to have faster heart rates than do boys and men. Athletes, such as runners, who do a lot of cardiovascular conditioning may have slow heart rates and experience no problems.

How to check your child's pulse

As the heart forces blood through the arteries, feel the beats by firmly pressing on the arteries, which are located close to the surface of the skin at certain points of the body. The pulse can be found on the side of the lower neck, on the inside of the elbow, or at the wrist. When taking a pulse:

If unsure about your results, ask another person to count for you.

How does the heart beat?

An electrical stimulus is generated by the sinus node (also called the sinoatrial node, or SA node), which is a small area of specialized tissue located in the right atrium (right upper chamber) of the heart. Under normal conditions, the sinus node generates an electrical stimulus every time the heart beats (60 to 190 times per minute, depending on the age of the child and his/her activity level). This electrical stimulus travels down through the conduction pathways (similar to the way electricity flows through power lines from the power plant to your house) and causes the heart's chambers to contract and pump out blood. The right and left atria (the two upper chambers of the heart) are stimulated first and contract a short period of time before the right and left ventricles (the two lower chambers of the heart).

Under some conditions, almost all heart tissue is capable of starting a heartbeat, or becoming the "pacemaker," just like the sinus node. An arrhythmia may occur when:

In any of these situations, the body may not receive enough blood because the heart cannot pump out an adequate amount with each beat as a result of the arrhythmia's effects on the heart rate. The effects on the body are often the same, however, whether the heartbeat is too fast, too slow, or too irregular.

What are the components of a permanent pacemaker/ICD?

A permanent pacemaker has two components, including the following:

Older pacemakers sent out electrical signals at a constant rate, regardless of the heart's own rate. Pacemaker technology is now much more advanced. Today, pacemakers can "sense" when the heart's natural rate falls below the rate that has been programmed into the pacemaker's circuitry.

Pacemaker leads may be positioned in the atrium, ventricle, or both, depending on the condition requiring the pacemaker to be inserted.

It is possible to have both atrial and ventricular arrhythmias, and there are pacemakers which have lead wires positioned in both the atrium and the ventricle. There may be one lead wire for each chamber, or one lead wire may be capable of sensing and pacing both chambers.

An ICD has a lead wire that is positioned in the ventricle, as it is used primarily for fast ventricular arrhythmias.

Pacemaker/ICD insertion is done in the hospital, either as a short-stay surgical procedure, or in the cardiac catheterization or electrophysiology laboratory. The child is given medication to help him/her relax during the procedure.

In younger children, the pacemaker may be placed into the abdomen through a small incision. A second incision is made in the chest to visualize the heart. The lead(s) are guided to the heart, then placed on the heart's surface. This procedure is usually performed in the operating room. Once the procedure has been completed, the child goes through a recovery period of several hours and often is allowed to go home the day after the procedure.

After receiving a pacemaker or ICD, you will receive an identification card from the manufacturer that includes information about your child's specific model of pacemaker and the serial number. You should carry this card with you at all times so that the information is always available to any healthcare professional who may have reason to examine and/or treat your child. A medical identification bracelet or necklace can also be worn by your child to alert others about the pacemaker or ICD in case of emergency.

What precautions should be taken with an artificial pacemaker?

Your child should wear a medical identification bracelet or necklace to let others know about the pacemaker in case of emergency. When he/she is old enough to have a wallet, it is a good idea to also carry an ID card that states he/she has a pacemaker.

In the past, people with pacemakers risked interference with the proper functioning of their pacemakers if they were too close to many items common in the everyday environment. However, with improvements in pacemaker technology, some of these issues are no longer of major concern.

According to The American Heart Association and pacemaker manufacturers, the following items have not been shown to alter the function of today's pacemakers:

Make sure your child uses caution when going through security detectors at airports and government buildings such as courthouses. Pacemakers currently being manufactured should not be affected by these security devices, as long as its wearer moves through and away from the detector at a normal speed. Check with your child's physician about the safety of going through such detectors with your child's particular pacemaker. The metal in the pacemaker may activate a security alarm, however. Be prepared to show an identification card for the pacemaker or a medical identification bracelet in order to pass through security checkpoints.

The following situations may cause interference with pacemakers. (Some of the activities mentioned are not appropriate until a child nears adulthood, but may affect older teenagers.) Discuss the following in detail with your child's physician:

Consult your child's physician before your child undergoes these procedures.

Your child may also have to take antibiotic medication before any medically-invasive procedure to prevent infections that may affect the pacemaker.

Always consult your child's physician if you have any questions concerning the use of certain equipment near your child's pacemaker.

Can my child participate in regular, everyday activities with a pacemaker?

Once the pacemaker has been implanted, children with pacemakers should be able to do the same activities everyone else in their age group is doing: living normally.

Always consult your child's physician when he/she feels ill after an activity, or when you have questions about beginning a new activity.

How can I ensure that my child's pacemaker is working properly?

Although your child's pacemaker is built to last several years, always check the pacemaker regularly to ensure that it is working properly. The proper method for checking the accuracy of your pacemaker includes the following:

Always consult your child's physician for more information, if needed.

Our Electrophysiology Program offers all specialized care options for children with potential heart rhythm problems and for children living with a pacemaker or other implantable device.