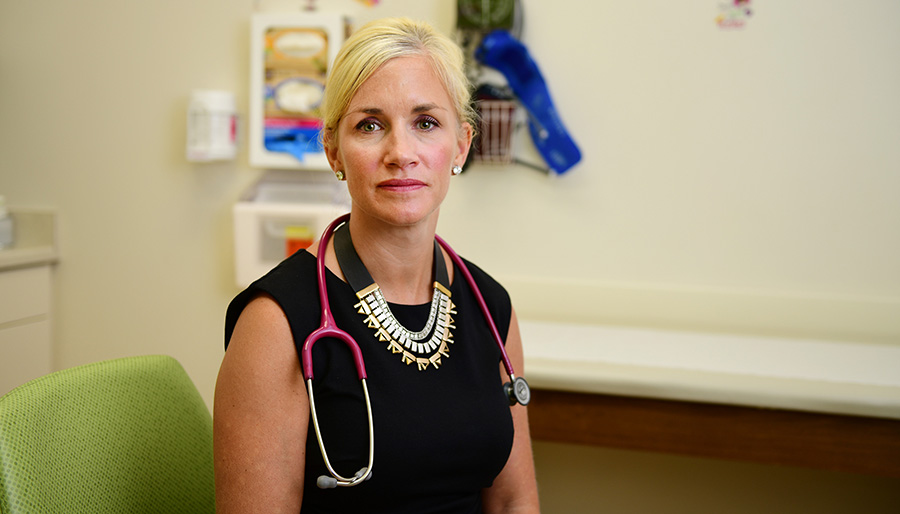 The scariest day of my career

When I got into work that Thursday at Bluemound Pediatrics, I reviewed my schedule and got started with patients like any other day. I saw that I had an appointment with Christina* later, a teenager who I had worked with throughout her life for primary care. I knew her well and, overall, she was healthy, active and easy-to-work-with.

That day, she was coming in as a follow-up for pneumonia. She had visited an urgent care a couple days prior with chest pains and trouble breathing, and received antibiotics and an inhaler. After receiving a note that she’d visited an urgent care, I had encouraged them to come visit me if she didn’t get better. Her treatments seemed normal based on her diagnosis, but her visit to urgent care had caught my eye — pneumonia wouldn’t typically affect a healthy athlete like her, especially in the middle of summer. Uncommon, but not impossible.

Christina and her mother had arrived to the office and our team decided to get started with her appointment ahead of schedule. Later, we’d learn that timing was vital. I was in my office when the nurse said to me, “You need to come see Christina right away. Her oxygen level and respiratory rate are in the 60s.” Keep in mind that a normal oxygen level is around 100 and a normal respiratory rate is in the 20s. I turned the corner into Christina’s exam room and immediately knew we had to act fast.

As soon as I laid eyes on her, I asked the team to call an ambulance.

Christina was extremely pale and thin. She had lost a significant amount of weight since the last time I had seen her a few months prior and she was visibly struggling to breathe. She wasn’t getting enough oxygen.

I tried not to let Christina or her mother see the fear I had in that moment, but here was a previously vibrant and healthy child who I now feared might stop breathing right in front of me. I started reviewing the steps for treating respiratory failure in my head as I prepared for the moment she could no longer breathe.

We called for an ambulance and, thankfully, Christina remained awake and breathing while she was rushed to the Emergency Department (ED) at Children’s Wisconsin. It was less than an hour between her arriving at the primary care clinic and getting a chest x-ray in the ED.

That hour was the scariest of my career.

My concern and fear deepened when the team at the hospital told me she had acute respiratory failure and was rushed to the pediatric intensive care unit. I truly didn’t know if this young woman was going to survive. I still have a hard time processing how she looked and how sick she really was based on her vital signs.

Ultimately, her lungs had a severe reaction to something she inhaled. My colleagues and I now suspect it was a result of vaping. The damage it caused inhibited her lungs’ ability to get oxygen into her blood and subsequently to her organs. The team took images and scans of her lungs as well as other tests to confirm her injuries were like the other vaping-related patients before her. She was then given a bilevel positive airway pressure, or BPAP, device and a high dose of steroids.

I followed up with Christina and her team as she was in the hospital for eight days. It was around this time that the team at the hospital was connecting the dots between these young patients and it was becoming clearer that vaping was the common factor.

I had spoken to Christina about vaping in the past because it’s become so prevalent that we ask all of our teen patients about it. She and I had a conversation about the dangers of it, but neither of us knew that within months it would nearly kill her.

“I started vaping because it was popular and I assumed it was better than smoking a cigarette,” Christina told me after getting sick.

She handed in her vape pods to be tested by the Wisconsin Department of Health Services and we have been watching for updates from their investigation closely.

I’m thankful that Christina survived that day. I’m not sure she would have if everything didn’t line up the way it did.

When I asked her what she would say to others now, she responded, “Vaping has been made too normal in our teen community and the thought of what we’re actually inhaling doesn’t really cross our minds,” she shared. “To all my peers, please stop inhaling chemicals through vaping. Trust me, it’s not worth it.”

Now, 10 weeks later, Christina is headed off to college. The thought of her starting classes brings tears to me and our team. Just a short time ago, we feared she would lose her life and that her family would have to plan a funeral. Sadly, other families across the country have had to.

Jennifer Schreiber, MD Pediatrician Bluemound Pediatrics
Children’s Wisconsin is the region’s only independent health care system dedicated solely to the health and well-being of children. At Children’s Wisconsin, we know kids aren’t just little adults and we tailor care specifically for the unique needs of a small, growing body.