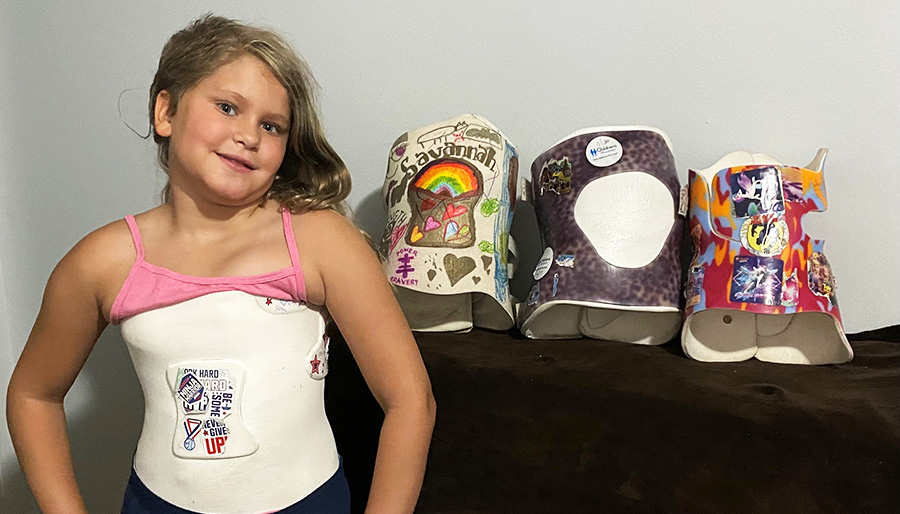 On Halloween 2016, Savannah had just come back from trick or treating and wasn’t feeling well. Normally a spunky 3-year-old, Savannah didn’t want to play with her brother, and wasn’t interested in eating or drinking — not even candy.

Savannah had been battling a fever for a couple of days, and despite trips to the pediatrician, there was no obvious cause. Savannah’s mom, AshLey, called her pediatrician again the following morning, and hearing Savanah’s new symptoms, told them they should head to local emergency department. Ultimately, Savannah was referred to Children’s Wisconsin. While a battery of tests didn’t reveal the cause of her fever, Savannah’s doctor did make another startling discovery.

“The doctor came in to talk with me and at that moment Savannah leaned forward on the bed,” said AshLey. “The doctor and I both noticed at the exact same time that it looked like her spine popped out and was a perfect S shape. Very graciously and calmly, the doctor said, ‘Let’s check that out.’”

Savannah went for an X-ray of her spine and was diagnosed with early onset scoliosis. Scoliosis is a sideways curvature of the spine that resembles the shape of an “S,” and most often it occurs during the growth spurt just before puberty. Savannah has a right major thoracic curve of 44 degrees, which is considered severe scoliosis. Two weeks later, Savannah met with John Thometz, MD, medical director for orthopaedic surgery at Children’s Wisconsin. Dr. Thometz fitted Savannah for her first brace — a traditional Boston brace — shortly before the age of 4.

A Boston brace is a plastic body jacket, also referred to as a Thoraco-Lumbo-Sacral Orthosis (TLSO) brace, that wraps under the arms and around the rib cage, lower back and hips to keep the spine in a straighter position. Typically, a Boston brace is worn 18-23 hours a day and, depending on growth, a patient will need a new brace every 8-12 months. For a child as young as 4, wearing the brace for this length of time can be difficult.

“Savannah is very active and she struggled mightily wearing the Boston brace in the beginning,” said AshLey. “It was difficult for her to maintain her same level of physical activity, and she couldn’t keep up with her peers or play with her brother the same way. It was also very uncomfortable and hot to wear during the summer. The brace would cause skin issues.”

Savannah’s school made adjustments to playground equipment so that it was more accessible to her, and over time she became more compliant wearing the brace, but it was still difficult.

“Going to the bathroom was a challenge,” said AshLey. “Finding clothes that fit is always difficult. Savannah just always felt different from her peers.”

When Savannah was 6, Dr. Thometz told AshLey that Savannah would be a good candidate for an innovative new solution. AshLey was all ears. 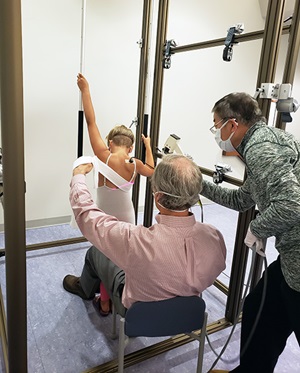 Dr. Thometz, who is also a professor of pediatric orthopedics at the Medical College of Wisconsin, was referring to a 3D-printed Elongation Bending De-Rotation Brace (EBDB). Dr. Thometz and Xue Cheng Liu, MD, PhD, a pediatric orthopaedic physician and researcher with the Children’s Wisconsin Research Institute, have been researching the use of 3D-printed orthotic devices, such as braces, that are used to improve the function of the joints and spine for 12 years. Dr. Thometz and Dr. Liu innovated EBDB at Children’s Wisconsin and developed the first computer assisted design (CAD) and computer assisted manufacturing (CAM)-based EBDB more than seven years ago. The technique involves elongation, bending and de-rotation of the spine to correct a spinal curve.

In 2015, Dr. Thometz and Dr. Liu pioneered the use of EBDBs as an alternative to prolonged plaster or fiberglass casting in infants with severe scoliosis. They found the 3D-printed EBDB to be a game changer for those patients who would otherwise need a cast, and then began to consider it as an alternative to the Boston brace. Unlike the unyielding Boston brace, a 3D-printed EBDB is lightweight, breathable and flexible, even allowing the wearer to bend at the waist.

“A 3D-printed brace usually weighs 30-50 percent less than a traditional Boston brace because it’s much less material and no padding,” said Dr. Liu, who is also a professor of orthopedic surgery at the Medical College of Wisconsin. “You can also incorporate a mesh- or lattice-like pattern in the brace which makes it extremely breathable.”

Perhaps even more importantly, the 3D-printed brace is designed based on a 3D scan of the child’s spine using CAD, so the fit is an exact match.

“Though a traditional Boston brace is the gold standard, most evidence-based brace available, the 3D-printed brace does offer a bit more in the way of customization,” said Dr. Liu. “For the 3D-printed EDBD, we create a 3D model of the child’s spine and then use CAD to correct the spine curvature before we even print the brace. We are not just customizing the brace, we are optimizing it. This is a big deal.”

Dr. Liu and Dr. Thometz collaborated on a brace design and then worked with Milwaukee School of Engineering (MSOE) to find the most suitable brace material and do the actual 3D printing.

“We sent the spinal geometry file to the engineer who used computer assisted manufacturing (CAM) to print the brace,” said Dr. Liu. “The first brace we made broke almost immediately, but we kept pursuing it and found a different material that was stronger, but still very light.”

The benefits of 3D-printed braces have proven to offer greater patient satisfaction, which leads to improved compliance in wearing it and, ultimately, better outcomes. It’s important to note that not all kids are eligible for a 3D-printed brace. It depends on a variety of factors including age, size, spinal curve and more. All of the pediatric orthopedic experts within the AIM Spine Center are equipped to treat children with a 3D-printed brace if they qualify.

Children’s Wisconsin is the first center in the world to use 3D printing to create the EBDB for infantile and juvenile scoliosis. In fact, the pioneering work of Dr. Thometz and Dr. Liu was featured at the virtual International Research Society of Spinal Deformities conference hosted by Children’s Wisconsin and Medical College of Wisconsin in January 2021. It marked the first time this event was held in the United States and featured physicians, orthotists, physical therapists, researchers and engineers at the top of their disciplines from 14 countries sharing their expertise and learning from each other. Children’s Wisconsin and MCW were selected to host the conference by their peers within the society. 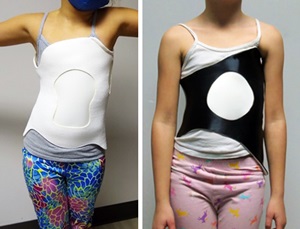 Savannah, now 8, was fitted with her new 3D-printed brace in July 2019 and AshLey reports it’s been a lifesaver.

“The new brace is incredible,” said AshLey. “It’s much lighter, far more comfortable and it allows her to be active, so she is much more compliant about wearing it. She also wore it through last summer and her skin didn’t break out.”

Savannah, who likely will wear a brace until after puberty when she’s done growing, even prefers to sleep in the brace and often forgets she has it on. Clothing that fits is also much easier to find.

“With the Boston brace, one of the hardest things was Savannah couldn’t wear jeans with a button or a snap,” said AshLey. “She can do that now. I also don’t need to buy clothes in a size bigger like I did to accommodate the old brace.”

Even under clothing, you can’t really see the brace, so Savannah can choose whether to show off the new brace to friends and classmates, or keep it private.

“When Savannah got her new brace, she liked showing it off to classmates,” said AshLey. “She called it her body armor. But if she doesn’t want to show people, she doesn’t have to. She’s not sticking out like she was before.”

From AshLey’s perspective, the brace is an example of how the Children’s Wisconsin team is always pushing itself to go beyond what’s known to find new and better solutions. With her 3D-printed brace, Savannah’s spinal curve reduces to 22 degrees.

"I never hear, ‘I don’t know,’ from anyone at Children’s Wisconsin,” said AshLey. “I hear, ‘I don’t know…yet.’ This brace is a testament to how they are always innovating. When Dr. Thometz said they might have something better for Savannah, which was very empowering. I have total trust and confidence in Dr. Thometz and his team, and I know they are always looking out for what’s best for Savannah."

Jen Novotny Writer Children's Wisconsin
Pediatric orthopedic specialists at Children’s Wisconsin have the advanced training and expertise to provide the most qualified care to growing children and teens. Recognized as one of top programs by U.S. News & World Report, the program provides orthopedic care from spine, trauma and fracture care, to sports medicine and concussion care.