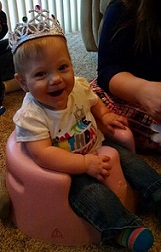 First birthdays are always special. But when you've gone through what little Paisley and her family have, getting there means so much more than a candle on a cake.

About 24 weeks into her pregnancy, Paisley's mom, Stephanie VanEffen, was told her baby had spina bifida, a birth defect that causes paralysis. There is no cure for spina bifida, and until very recently, there wasn’t much that could be done to make the situation better.

That's where Children's Wisconsin and the Fetal Concerns Center came in. Paisley is one of the few babies in Wisconsin to have undergone fetal myelomeningocele surgery. During this procedure, surgeons closed the opening on Paisley’s back while she was still in the womb. This surgery has been shown to lead to better results and outcomes than traditional post-birth repair.

Her journey since then has been full of ups and downs, including a lengthy stay in the Neonatal Intensive Care Unit (NICU) in Milwaukee, four hours away from their home in Escanaba, Mich. But the good news is Paisley and her family are doing well, and happy to be celebrating this milestone.

We spoke with Stephanie just a few days before Paisley's first birthday in March.

How does it feel having Paisley turn 1?
We're all excited. She's actually impressing us all - she's been moving her legs, and she holds 75 percent of her own weight while crawling. We didn't know how she would do because of her spina bifida, but she's doing really well.

Take us back to that moment when you learned of her diagnosis. What was going through your mind?
When I found out she had spina bifida, it was a scare, of course. But the doctors are there to tell us about all that could happen, and with Children's Wisconsin it was really great because of all the doctors I talked to before I had my surgery. They told us all the positives and negatives and everything else. It was still a scary thing, but it was something we knew we had to do for Paisley's sake. We didn't know whether it would benefit her or not, but it was always a chance you had to take so that by the 1-year mark hopefully she would be getting the strength to start crawling and walking. It's really amazing, because she was born early, too!

What did you think about Paisley having to get the surgery?
It was really scary hearing about how it was so new, but at the same time Paisley's social worker for the hospital got me in touch with the first mom who had the surgery. I actually had a lot of information from that family, and I still talk to them. It was really scary for me, but after talking to the moms and meeting the doctors, I felt really comfortable. To this day, I can walk into Children's Wisconsin and see those doctors and they actually remember me. Or if they don't remember me, they remember Paisley. It's weird, because they see so many children every day, and multiply that by a year, and they can still connect your face to that. It's amazing.

Paisley is in a good place now, but it sounds like there have definitely been ups and downs.
There have been ups and downs. We actually spent Christmas at Children’s Wisconsin on the neurosciences floor. She ended up getting sick the second week of December, and from December 12 to December 29 she was hospitalized. We had a little bit of a setback, but of course she just sprung back again like, "What did you guys think was going to happen?" (laughs) Nothing holds her back.

It sounds like she's got quite a personality already.
Oh, she does. She always smiles, so that's how I knew she was sick back in December, because every time I touched her she would just scream. She doesn’t even fuss usually. She just yells at you when she wants the bottle. But she's pretty much happy all the time.

How was celebrating Christmas in the hospital?
We enjoyed it a lot. My other two children got to come down and spend it with us as well, and Santa Claus actually came to the hospital. I spent the night at the Ronald McDonald House, and Paisley obviously had to spend the night at the hospital. The next morning we got ready and we went over and spent Christmas with Paisley. The Ronald McDonald House put on a really nice Christmas dinner for us. Everything panned out.

You've had to spend a lot of time at Children’s Wisconsin. What do you think of the place?
Oh, it's very nice. I spent the majority of 2015 in Milwaukee, Wisconsin. I enjoyed it. I have two older children, and when they weren't able to be with me because of school, or when my mother wasn't able to stay with me, I was able to stay there with my daughter in her NICU room. I was able to sleep right in the room with her and stay there. I spent 22 hours a day there.

You've probably gotten to know a lot of people here very well.
Yes, every time we come there, every visit we have, we visit the NICU to see some of the nurses, nurse practitioners, and of course we see Dr. Foy every visit.

It's kind of nice, because when I come down there I get to see the other children who were at the Ronald McDonald House that I'd seen for so many months. I get to see them as they're progressing and doing better. I've actually added a lot of the people onto Facebook, so we keep in touch. If we're there in the hospital at the same time, we try to meet up for lunch between appointments. It's really nice.

What is your schedule for coming back to Children's?
It's about every three months, for the spina bifida clinic. During that, it's pretty much a full day of doctor's appointments. Sometimes we come a day early so she can get all her imaging done, and we'll spend the night at the Ronald McDonald House. Then it's all-day appointments with urologists, neurosurgeons, developmental doctors, just to see how she's growing and what kind of things need to be altered to fit her. So far, things have been good. She's doing really well, and we're very happy.