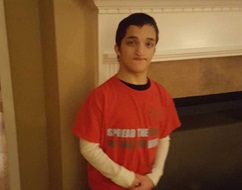 When Ben's mom was pregnant, it was discovered that he had an abnormality on one of his chromosomes that caused him to suffer a stroke while in utero. Because of this, his umbilical cord was badly damaged and Ben was born with many special needs.

Ben has undergone numerous surgeries in his still-young life. He required several surgeries to repair a bilateral cleft lip and palate and also underwent a hip osteotomy – a surgery to reshape his hip bone structure. Ben is seen for paralysis caused by his stroke and as well as neurology specialists for his seizure disorder. Ben also has many oral health issues and cannot eat by mouth, so he relies on a gastrostomy tube. All told, Ben sees specialists at Children's for special needs; orthopedics; craniofacial; ear, nose and throat; dental; neurology, and gastroenterology.

Because of Ben's rare condition, it's uncertain what can be expected for his future. But thanks to Children's and Wisconsin's Katie Beckett Program, Ben is doing well.

"Wisconsin's Katie Beckett program has been instrumental for our family," said Ben's mom, Christine. "This assistance helps Ben to have supplemental Medicaid coverage because of his many special needs and expensive care costs. I feel that for families with special needs children, Medicaid is a necessity."